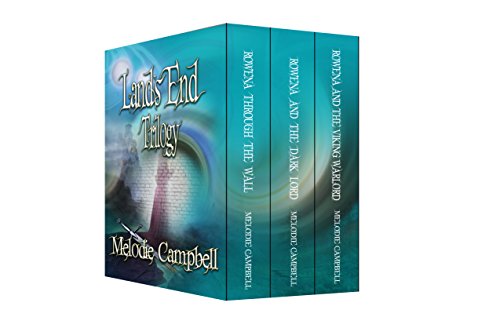 Kindle Price: 99 cents
On Sale! Everyday price:
Or FREE with

Melodie Campbell’s LAND’S END TRILOGY is a value-packed bundle that will magically transport you to a “hilarious” and “sexy” alternate world where the men are lusty and Rowena’s dresses are optional.

In ROWENA THROUGH THE WALL, a mysterious portal in a classroom wall sends college instructor Rowena Revel to an alternate world where she is kidnapped―not once, but twice―and the stakes get higher as the men get hotter.

In ROWENA AND THE DARK LORD, Rowena is abducted from Arizona and taken back to medieval Land’s End where she is torn between the man she loves and the mage who fires her desire.

In ROWENA AND THE VIKING WARLORD, Rowena attempts to cast a spell to help her loved ones in peril—but it backfires, as does spell after spell in the sidesplitting, bodice-ripping conclusion to Rowena’s adventures in Land’s End.