If you like a fun cozy mystery download Stilettos & Scoundrels now and hop over to the authors website at Laina Turner.com and learn more about the Presley Thurman mystery series AND enter to win a raffle for fun prizes! 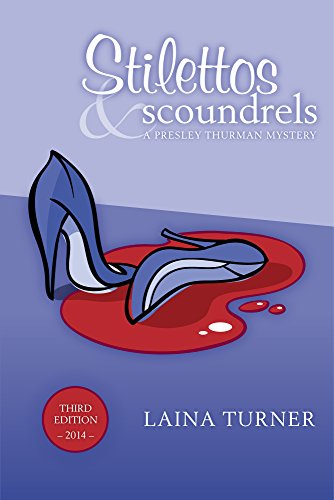 87 Rave Reviews
Kindle Price: 99 cents
Text-to-Speech and Lending: Enabled
Don’t have a Kindle? Get yours here.
Here’s the set-up:

Gently touching the handle of the front door was all it took to make it swing wide open. It was late, after midnight, and everyone in the house except Tom was asleep. As usual, Tom was in his study working late. Walking carefully and quietly through the foyer, the adrenaline began to kick in. The intruder confidently walked into Tom’s study. Tom was concentrating so hard on the papers in front of him that he was unaware of anything else. Raising his hand, the intruder hit a stack of books sitting on a side table, sending them crashing to the floor. Tom spun around with a look of shock on his face as he recognized the person swinging a sharp object toward him. Tom raised his hands to protect himself but he wasn’t quick enough. The spikey end of the stiletto heel punctured his neck instantly, sending a spray of blood over the papers on his desk. He tried to cry out, but all that sounded was a gurgling noise as his lungs filled with blood. The intruder set the shoe down next to Tom and backed out of the room softly, closing the door to the study and hoping no one would come looking for Tom until morning.

“Fashionista meets shopaholic meets amateur sleuth. Stilettos & Scoundrels is a story that is tons of fun, sassy, quirky and will leave the reader laughing as they race through the pages to see what happens next and solve the mystery.” —Amazon

As a child Laina thought she would either be a truck driver (thanks to Jerry Reed in Smokey and the Bandit) or work at Taco Bell (her favorite restaurant as a child). As she grew older she realized her talents lay in academics and business and for the last several years has been a business consultant and college professor where she uses the analytical side of her brain and not the side that makes up stories.

Through all her career choices she has continued to have a passion for writing. This stemmed from childhood whereas an only child she developed a vivid imagination spending most of her time making things up and thinking the Incredible Hulk lived in her closet.

Proud of her vast experiences in life from barrel racing to being on the dance team for a semi pro basketball team to being a mom of 2 amazing kids, she tells her family and friends that no one is safe from their escapades slipping in to her books.

Taking the plunge to write books that she actually lets people read in 2010, she has worked her way up to having 5 fans (maybe 6 now). Her blog, The Art Of Living Fabulously, was launched to share the daily fun in the life of a Real Housewife of the Midwest along with the musing of other fabulous ladies.

Discover KND Romance of The Week: FREE sample from Ben Adams’ debut rom-com Six Months to Get a Life