By Kindle Nation on April 17, 2015 in Romance of the Week
Like A Little Romance?

And for the next week all of these great reading choices are sponsored by our Brand New Romance of the Week, Olivia Noble’s Club Luxe Box Set: 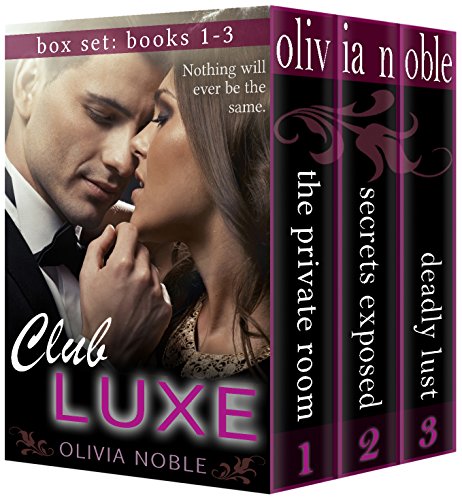 Warning: The irresistible Malcolm Cage will completely soak your panties. Laundry may be required. She has a thirst for danger. He is used to getting exactly what he wants…

Victoria Chase is Chicago’s hottest new reporter, looking to make the scoop of the century. Rumor has it that in the bowels of the city lies a private sex club for the wealthy elite. Willing to do anything for a story, she infiltrates the club, determined to uncover this urban legend. She didn’t expect to run into him:

The famous billionaire bad boy is the king of Club Luxe. Every Friday night, he reigns supreme over untold sinful pleasures in his underground kingdom. His one rule? He never participates and only watches–until he sees Victoria. She sets his body and soul on fire, and Malcolm does not plan on letting her go. Can Victoria keep it professional and get her story? Or will her heart betray her under Malcolm’s smoldering gaze?

With her life stolen from her, Victoria is left with no choice. She must drop everything and dedicate herself to helping the infuriating Malcolm Cage. But the task is a dangerous hunt for information that she promised herself she would avoid at all costs. It doesn’t help that Malcolm is utterly distracting with a voice as smooth as silk and eyes that make her body tremble.

Malcolm used to think that Victoria was just another slimy reporter, but she is quickly invading his heart with her stubbornness and bravery. He was once willing to do anything it took to protect his family, not caring who got hurt in the process–but he finds himself feeling guilty for manipulating Victoria. Even though he was the one who put her life at risk, he is now the only one who can save her…

With Malcolm presumably dead after a terrible accident, Victoria finds herself in the most dangerous situation imaginable: trapped in a foreign nation with nothing except the clothes on her back. She has no idea what to do next or how to get out of this mess. The only thing keeping her going is the willpower to finish the job Malcolm gave to her, and honor his final request to find Claire.

But Malcolm Cage isn’t the type of man who will go down without a fight.

Twists & Turns and Unstoppable Suspense = The perfect mystery novel…
Over 160 rave reviews for Once Upon a Lie by Jill Paterson – Free Sample!