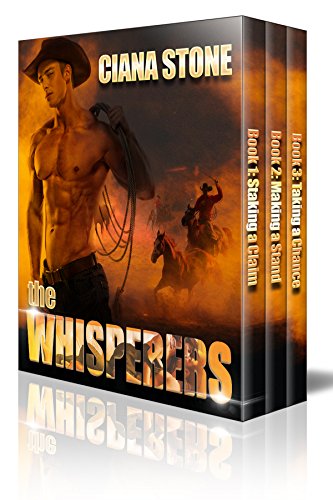 – Learn More
Text-to-Speech: Enabled
Don’t have a Kindle? Get yours here.
Here’s the set-up:
A three book set. The Nash family has a legacy – no females are ever born into the family and all of the men are Whisperers. And their ability to charm doesn’t stop with horses. No, indeed, women are drawn to them like the proverbial bee to honey. They’re simply irresistible.There’s just one catch. There’s a curse on the family, one that makes a Nash man’s chance at happily ever after slim to none.
At least until now. Join Jed, Jake and Jesse as they discover that there are things in this world stronger than curses, and that despite the fact that they are not looking for love, love just might find them.Book One: Staking a ClaimLust was a horse he could ride. Love? He didn’t believe in love. Until she walked into his life and changed everything.
Jed Nash had a few simple rules in life. (1.) Family always comes first, (2.) Know when to keep it in your pants, (3.) Don’t mix business and pleasure, and (4.) Don’t believe in love. All it brings is misery and heartache.He had no trouble following his own rules. At least not until the new trainer on his ranch shows up. He was expecting a man. What he got was a woman who had him battling attraction that was hot and wild. Sure as sunshine, if she stayed he wouldn’t be able to keep his hands off her.

Jake, the good-time boy of the family, is finally stepping up to the plate and doing everything he can to help the family. He’s not only eager to help save the ranch, but also to prove to Teddy Morgan that he’s a man she can trust and depend on.

Seems the timing couldn’t be worst. The woman set on destroying the Nash family will stop at nothing to exact her revenge. No one will stand in Deidre Manning’s way. Not even her own stepson who is plotting against her.

Jake isn’t sure how to go about thwarting the Mannings and saving his family any more than he’s sure how to win Teddy’s heart. But he’s determined to do both because now that he’s found the woman he knows he wants to spend his life with, he’s going to do everything in his power to prove to her that he’s the right man for her.

Jesse Nash has seen more trouble in the last year that in all the previous years of his life combined. And he’s more than ready for some good times.

He’d planned on retiring from the Rodeo circuit, but his family needed money and the Rodeo was his best bet of a big payday. And it paid off – in more ways that one. Not only did he take home the buckle and the purse as All Around Cowboy at Nationals, but he met someone – someone who has him thinking about more than a quick roll in the hay.

The problem is, the woman he is interested in, Carly Marsh, wants nothing to do with love and commitment. A quick roll in the hay? That she can do.

The tables are turned and Jesse isn’t quite sure how to deal with it. But he’ll figure it out and somehow convince Carly there are some things worth taking a chance on. Like love. And him.


5-star Amazon reviews:
“I absolutely loved this set…”
“The series is fun, exciting, suspenseful, sexy, and romantic. A fantastic combination!!!”