The dreaded blue computer screen can be fatal… But can it produce love?
Bachelor.com (Bachelors Three Series) by Kathye Quick 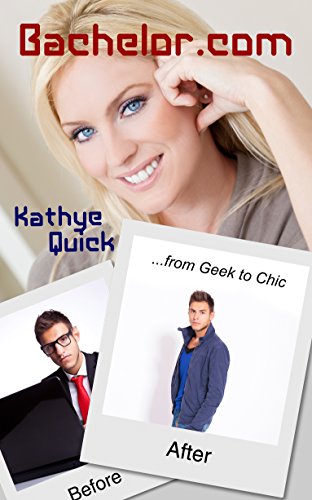 Jack Reeves has loved Kinley Adams since the day he rescued her computer from a fatal blue screen. In the two years since, the computer programmer has fantasized about a life with her.

Kinley, an Engineering Assistant, has come to think of Jack as more than just a friend. One night, just when each had finally decided to reveal their feelings are deeper than friendship, a terrible automobile accident puts their confessions on hold.

Doctors have no choice but to rebuild Jack’s face, and the result changes everything. Can Jack and Kinley overcome his transformation from geek to chic, a secret double life, and a horde of willing women who have discovered the new Jack Reeves? Will the frog ever become the prince and ride off with his princess to live happily ever after?

Born long ago in a place not so far away, Shenandoah, Pennsylvania, Kathryn Quick has been writing since the Sisters in St. Casmir’s Grammar School gave her the ruled yellow paper and a number two pencil. She writes contemporary and career romances, romantic comedies, historical romances as well as urban fantasy.

Kathye originally wanted to be President of the United States or an Organic Chemist, but somehow life got in the way. The Presidency seemed out of reach and night school to get her Ph.D. to create new molecule that would ultimately result in the betterment of humankind became a little time consuming while trying to raise twins, so she decided to write instead.

In her “other” life, Kathye is married to her real-life hero Donald and has three grown sons all having adventures of their own. She works for County Government (as close as she could get to the White House) and is plotting a novel about a new molecule that will ultimately result in the betterment of humankind.