For every parent forced to make heart-wrenching decisions… for every daughter who thinks she knows her mother’s story… comes this deeply moving novel by bestselling author Kathleen Shoop: THE LAST LETTER 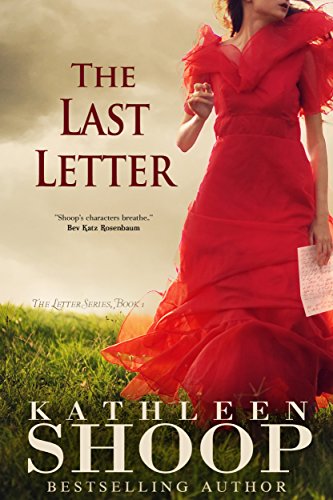 4.0 stars – 254 Reviews
Kindle Price: 99 cents
On Sale! Everyday price:
Text-to-Speech and Lending: Enabled
Don’t have a Kindle? Get yours here.
Here’s the set-up:

In the summer of 1905 Katherine Arthur’s mother arrives on her doorstep, dying, forcing her to relive a past she wanted to forget. When Katherine was young, the Arthur family had been affluent city dwellers until shame sent them running for the prairie, into the unknown. Taking her family, including young Katherine, to live off the land was the last thing Jeanie Arthur had wanted, but she would do her best to make a go of it. For Jeanie’s husband Frank it had been a world of opportunity. Dreaming, lazy Frank. But, it was a society of uncertainty–a domain of natural disasters, temptation, hatred, even death.

Review:
“Gripping historical fiction—A tale of two women finding meaning behind all that went wrong in their lives. A timeless tale of redemption with the best plot-twist at the end I’ve seen in a long, long time. Can’t wait for book two!” New York Times and USA Today bestselling author, Melissa Foster