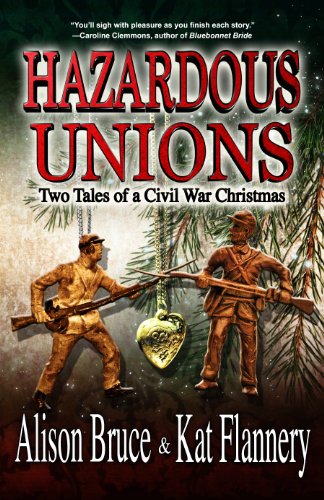 After the death of their father, twin sisters Maggie and Matty Becker are forced to take positions with officers’ families at a nearby fort. When the southern states secede, the twins are separated, and they find themselves on opposite sides of America’s bloodiest war.

In the south, Maggie travels with the Hamiltons to Bellevue, a plantation in west Tennessee. When Major Hamilton is captured, it is up to Maggie to hold things together and deal with the Union cavalry troop that winters at Bellevue. Racism, politics and a matchmaking stepmother test Maggie’s resourcefulness as she fights for Bellevue, a wounded Confederate officer and the affections of the Union commander.

In the north, Matty discovers an incriminating letter in General Worthington’s office, and soon she is on the run. With no one to turn to for help, she drugs the wealthy Colonel Cole Black and marries him, in hopes of getting the letter to his father, the governor of Michigan. But Cole is not happy about being married, and Matty’s life becomes all about survival.

Reviews:
“Maggie and Matty Becker will enchant you as they struggle for respect, survival, and love in the Civil War’s troubled time. You’ll sigh with pleasure as you finish each story.” —Caroline Clemmons, author of Bluebonnet Bride
“Double your reading pleasure with twin passions—two novellas featuring twins Maggie and Matty, and heroes who’ll steal your heart. Alison Bruce and Kat Flannery penned stories that play on your senses like a sonata. A must read!” —Jacquie Rogers, award-winning author of Much Ado About Madams