M. R. Mathias is our generation’s Tolkien and Stephen King rolled in one!
A barrel keg full of fantasy adventure awaits in Saint Elm’s Deep (The Legend of Vanx Malic Book 3) by M. R. Mathias

“There are few writers in the genre of fantasy that can equal the creative mind of M.R. Mathias – now acknowledged as a master in this genre of dragons and dwarves, and magic, and spells, and all aspects of fantasy.” — Top 100, Hall of Fame, Vine Voice, Book Reviewer, Grady Harp 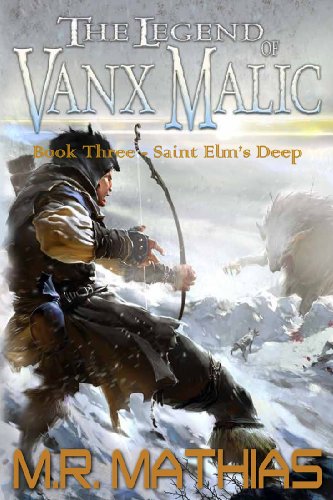 On Sale! Everyday price:
Or FREE with

– Learn More
Or currently FREE for Amazon Prime Members Via the Kindle Lending Library
Text-to-Speech and Lending: Enabled
Don’t have a Kindle? Get yours here.
Or check out the Audible.com version of Saint Elm’s Deep (The Legend of Vanx Malic Book 3)
in its Audible Audio Edition, Unabridged!
Here’s the set-up:

Here is what people are saying about Vanx Malic:

“I felt like I was in a whole new world reading this book… The storyline was also amazing. I would recommend anyone who loves fantasy books to read this as you will def be swept into this world!” – Avid Reader Reviews (*Review of Through the Wildwood, Book One)

“You’ve (Mathias) already achieved much, much more than so many people who like to think of themselves as writers.” — @Gollancz The Deputy Publishing Director of SF, Fantasy & Horror list of the Orion Publishing Group.

“When reading this book, I was reminded of several other fantasy novels that I have read previously. The author’s style is individual, but it has the flavor of a Tolkien novel, or possibly Robert Jordan. I detected a great amount of affection in his deliverance of the characters, and their progress throughout the story was handled well. I must say that Vanx is quite a likeable rogue, and the way that the story begins certainly grabs the reader, pulling them into the story whether they like it, or not.”– Kindle Review (*Review of Through the Wildwood, Book One)

Entertaining, action packed, and witty. Overall a good second book that starts where the first left off and I look forward to the next. – Jacob (Review of Dragon Isle, Book Two)

Snippet from Saint Elm’s Deep, The Legend of Vanx Malic Book III:
“I’ve been listening to all your spook talk for days,” Kegger said quite clearly, but with a caravaneers crudeness to his words. All of the gargan accent that had been in his voice when speaking of knives and bows, during his battling with Chelda, was gone, as if it had never been there. “My orders were to get you to the Lurr and wait for you to come out.” He hefted his axe and thumbed the edge he’d been sharpening nightly at the fire. “I’ve got a good bit of unfinished business in them woods myself. Twern’t no frost bite that took his limbs. The tree that had my brother was real. I swear it. I had to cut him from it. It was foul smelling, and as evil as the Letch itself. It bled thick red blood, just like you or I would, where my ax struck. I hurt it, and it screamed right at me before it turned Sean loose. It weren’t no magic fairy tree. This was as black and cold as the Letcher’s own wrath.”

“But you saw no sign of the fae in the Lurr Forest?” Gallarael asked.

“If I did, I didn’t know what it was,” Kegger chuckled. “Deer, elk, bear, and wolf. I know their sign well, but I’ve never seen a fairy turd, much less been inclined to look for one.”

The Legend of Vanx Malic continues with Book Three, “Saint Elm’s Deep”
After finding a map on a grueling hunt, Vanx and his new companions decide to travel deep into the Bitterpeaks, where a fabled hoar witch’s crystal palace supposedly sits hidden in a valley called Saint Elm’s Deep.

The story deepens, as we delve into Vanx’s past and the future of as unlikely a group of heroes as you will ever find. Action and adventure, drama and thrills, and a barrel keg full of fantasy adventure await readers in Saint Elm’s Deep, the third installment of The Legend of Vanx Malic.