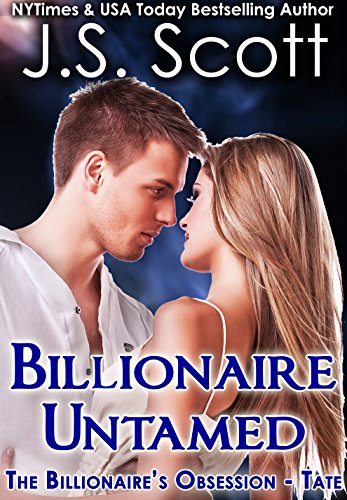 – Learn More
Or currently FREE for Amazon Prime Members Via the Kindle Lending Library
Text-to-Speech and Lending: Enabled
Don’t have a Kindle? Get yours here.
Or check out the Audible.com version of Billionaire Untamed ~ Tate (The Billionaire’s Obsession, Book 7)
in its Audible Audio Edition, Unabridged!
Here’s the set-up:
***Very Limited Time Sale containing an additional full-length bonus book***

This book can be read as a stand alone even if you haven’t read and of the books in The Billionaire’s Obsession series. Tate’s book is the first of the featured Colter billionaire brothers.

Lara Bailey isn’t in Rocky Springs for the hot springs, the resort activities or the fabulous skiing. She has come to Colorado for one reason and one reason only: to find and get close to Marcus Colter, the eldest Colter brother. Unfortunately, trouble finds her in the form of Tate Colter rather than Marcus. The youngest Colter brother is arrogant, cocky, smart, and tenacious in his attempts to find out why she wants to find Marcus even though she’s never met him. Lara isn’t willing to divulge that information, and Tate is determined to uncover her motives. It makes Tate one hot, wickedly sexy, adorably dimpled, alpha male pain in her backside.

Lara is really confused when Tate helps her out of a difficult and potentially dangerous situation. It leaves Lara wondering if he really is the cocky, arrogant jerk that he pretends to be, or if there isn’t much more to Tate Colter than she’d initially thought.

Tate Colter wants Lara Bailey in his bed…badly. When she completely blows him off and ignores him when they meet, he’s even more determined to find out her secrets and get her to submit to the molten desire that radiates between the two of them. The fact that she’s one tough female, a woman who can give back exactly what he dishes out, makes her even more intriguing to him.

Sparks fly as Tate and Lara become involved in a battle of wits and wills that will ignite flames of passion and desire like neither one of them have ever experienced. But when deception is discovered and a betrayal takes place, can these two adversaries who are so much alike work together without letting the white-hot passion burning between them incinerate them both?

Not intended for teens or children. 18+ only