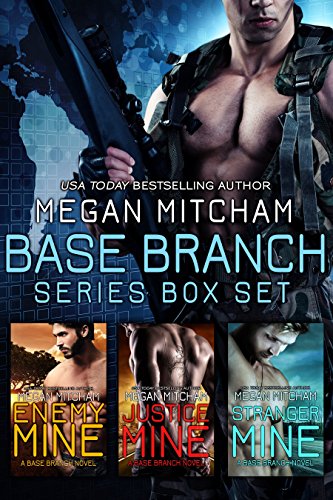 Kindle Price: 99 cents
On Sale! Everyday price:
Text-to-Speech: Enabled
Don’t have a Kindle? Get yours here.
Here’s the set-up:
Three bestselling Base Branch Series novels available in one set.

Known by few as the Base Branch, the United Nations’ Special Operations Forces provide globe defense against any who threaten the fragile balance of peace. They never expected they’d have to defend their hearts.

ENEMY MINE
Base Branch Novel 1

Born in the blood of Sierra Leone’s Civil War, enslaved, then sold to the US as an orphan, Base Branch operative Sloan Harris is emotionally dead and driven by vengeance. With no soul to give, her body becomes the bargaining chip to infiltrate a warlord’s inner circle. The man called The Devil killed her family and helped destroy a region.

As son of the warlord, Baine Kendrick will happily use Sloan’s body if it expedites his father’s demise. Yet, he is wholly unprepared for the possessive and protective emotions she provokes. Maybe it’s the flashes of memory … two forgotten children drawing in the dirt beneath the boabab tree… But he fears there is more at stake than his life.

In the Devil’s den with Baine by her side, Sloan braves certain death and discovers a spirit for living.

JUSTICE MINE
Base Branch Novel 2

For justice. For country. For love.

After witnessing her friend’s sexual assault, seven-year senior Magdalena Wells escapes an attack with a few bruises and a thousand questions. As a journalist in practice, if not in pay, Mags vows to utilize the skills she mastered in the Democratic Republic of Congo and answer every single one—just as soon as she gets the hell out of town.

Law Pierce’s aim is rest and relaxation after two years undercover in South Africa on an extended Base Branch mission, but restlessness puts him in trouble’s path. As a servant of justice, Law will do everything in his power to keep trouble safe. The fact that trouble’s petite stature and luscious curves stir his every primal instinct is a massive inconvenience he struggles to ignore.

Together Magdalena and Law uncover a web of corruption and dirty lies that could set their country’s top official ablaze—if the inferno doesn’t consume them first.

STRANGER MINE
Base Branch Novel 3

One takes control. One finds balance in letting go.

Base Branch operative Ryan Noble is accustomed to taking orders—whether from his commander or his overbearing mother. His best friend urged him to take control of his life, but the only thing worse than an angry woman is a teary one. He has no desire to upset his mother’s fragile emotions. Losing his sister was hard enough; his mom couldn’t bear losing another child—even if it is just to the other side of D.C. It’s a damn good thing she doesn’t know what he does for a living.

On a routine mission to destroy a cargo-free human-trafficking facility and exterminate its operators, Ryan blows his extraction to rescue a woman he finds chained inside.

Piper Vega is caught between metal and a hard place. She needs information and it has taken far too long to cull it from her leads—also known as her captors. She finally has the facts she needs to complete her task, but it’ll take a miracle to set her free and see it achieved. Santo Padre knows she never expected her good favor to come in the form of a man.

Ryan takes the reins of life in his sturdy grip while Piper discovers balance in loosening hers. Through intense battles of will, both find the unexpected.

Enjoy Megan Mitcham’s Books? Tell us Why and Win a Free Book!

Former beauty queen, Ashley Winston’s preferred coping strategy is escapism. However, when a family tragedy forces her to return home, Ashley can’t escape the notice of Drew Runous…
Beauty And The Mustache (Knitting in the City Book 4) by Penny Reid

Deciding between Kindle freebies can be hard… We’ve made it easy: Bestselling Must-Have Titles for Free!