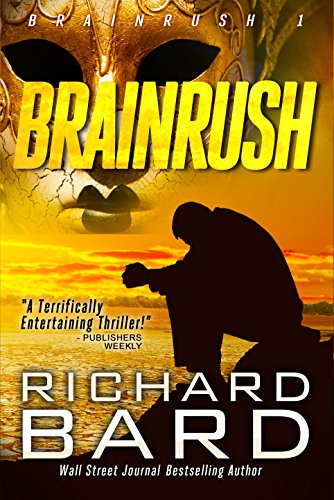 4.3 stars – 1,729 Reviews
Kindle Price: FREE!
Text-to-Speech and Lending: Enabled
Don’t have a Kindle? Get yours here.
Or check out the Audible.com version of Brainrush (Brainrush Series Book 1)
in its Audible Audio Edition, Unabridged!
Here’s the set-up:

“Brainrush explores the bonds of friendship while pushing the boundaries of science, creating a compelling, action-packed thriller with a climax that’s a knock-out!”– CJ Lyons, New York Times Best-Selling Author

“If this startling debut doesn’t have you turning pages at breakneck speed, then you’re not paying attention. Rich characters, crackling dialogue, and a climactic sequence that is stunning, enervating, and innovative all at once. Richard Bard is a voice to be reckoned with.”– Rebecca Forster, USA Today Best-Selling Author

Follow Richard Bard on his BookGorilla author page for his latest titles!

Brand new for October 16!
Enter our Amazon Giveaway Sweepstakes to win a Kindle Fire tablet!
Sponsored by Natalie Ann, author of All Or Nothing

A long lost secret threatens to destroy everything River has worked for… including his chances with Mariah.
Dirty Bossing: An Alpha Billionaire Romance Standalone by Sarah J. Brooks