Mastermind. Con-Artist. Hacker. Burglar. Muscle man.
Together, this crew will execute the most ambitious heist ever conceived.
Jubilee: The Heist to Erase Debt by Joseph Preacher

Jubilee: The Heist to Erase Debt 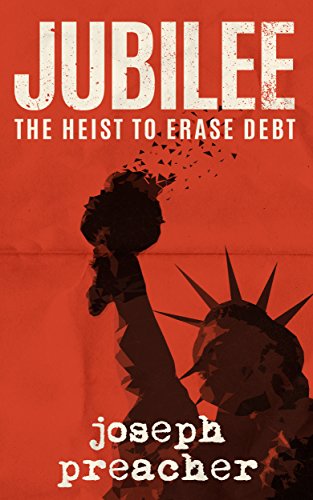 5.0 stars – 7 reviews
Kindle Price: $2.99
Everyday Price:
Text-to-Speech and Lending: Enabled
Available on Audible
Don’t have a Kindle? Get yours here.
Here’s the set-up:

Mastermind. Con-Artist. Hacker. Burglar. Muscle man. Together, this crew will execute the most ambitious heist ever conceived.

On the surface, Roman Hawker is the consummate professional. Behind that squeaky-clean façade lies a secret; he’s a masterful thief. After yet another successful robbery, Roman and his partners-in-crime are ready to celebrate, but that celebration is short-lived when they are shaken by the death of Roman’s estranged father.

When the facts leading up to his father’s death come to light, Roman’s friends rally around him to get revenge. But it means they’ll have to commit to executing the most harrowing plan that Roman has ever come up with. Their combined efforts could potentially free society from the shackles of crippling financial debt, but the avenues they’ll have to navigate to succeed will prove to be far more challenging than any of them could have predicted.

Jubilee, an ingenious malware program derived from the infamous Stuxnet, is the only thing that can accomplish their objective. Can Roman and his crew evade the FBI manhunt long enough to pull this one off? Or will the shadow organization that will stop at nothing to find them be the one to compromise their mission?

Jubilee: The Heist to Erase Debt is packed with heart-stopping political intrigue, adrenaline-fueled suspense, and high-octane action. It’s a slick heist and technothriller that taps into the unrest and disillusionment of debt and its devastating effects on society.