All the evidence points to Alexa. Her gun was the murder weapon and her cell phone places her at the scene of the murders….
Deborah Hawkins’ bestselling legal thriller Dark Moon 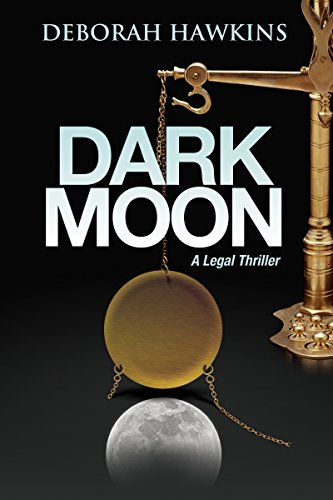 Legendary criminal defense attorney, Sarah Knight, has spent all of her forty-six years hiding the unspeakable secrets of her past. Now, newly arrived in San Diego from New York, she is appointed to represent Alexa Reed, a former U.S. Supreme Court clerk and the daughter-in-law of Supreme Court Justice Coleman Reed. Alexa is arrested for the murders of her ex-husband, attorney Michael Reed, and La Jolla psychologist, Ronald Brigman. During bitter divorce proceedings, Brigman has declared Alexa’s reports of Michael’s domestic abuse false, has diagnosed her with borderline personality disorder, and has given Meggie and Sam, ages six and five, to their abusive father.

All the evidence points to Alexa. Her gun was the murder weapon and her cell phone places her at the scene of the murders. Sarah is warned that doing anything more than the minimum for her client will be professional suicide. Coleman Reed wants Alexa sentenced to death without delay. But Sarah and her investigator, ex-FBI agent Jim Mitchell, refuse to be intimidated even after attempts on Sarah and Alexa’s lives. They discover Michael Reed’s taste for high-priced call girls and his entanglement in an extensive pattern of criminal financial dealings. But when Coleman manipulates the trial judge to exclude Sarah’s star witness on the eve of trial, she must risk discovery of her own terrible secret to save Alexa’s life.

“A gripping study in psychology and legal process wound deftly into the footprints of a legal thriller that is hard to put down, holding the rare ability to immerse both genre readers and more general-interest thriller and mystery enthusiasts, alike.” – D. Donovan, Senior Reviewer, Midwest Book Review