Every lady desires the heart of a duke.
6-in-1 Historical Romance Boxed Set: DUKE OF HEARTS by USA Today and bestselling authors

by USA Today and Bestselling Authors 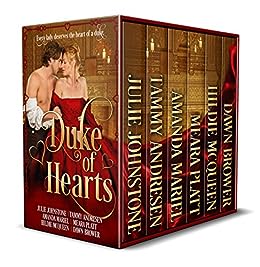 Every lady desires the heart of a duke.

From USA Today and Bestselling Authors comes a collection of swoon worthy novellas. Whether on the Highlands of Scotland, or in Regency England, dukes reign supreme in matters of love.

It’s in the Duke’s Kiss by Julie Johstone
Determined to stop his irresponsible brother from seducing an impetuous debutante set on thwarting her mother’s matchmaking schemes, the Duke of Blackbourne, plots to intercede, but his plans go awry when he kisses Lady Emma and realizes he’s drawn to her. The problem is, she’s everything he was positive he didn’t want in a wife, yet when he stands to lose her after his well-intentions to protect her are revealed, he realizes what he wanted and what he needs are vastly different. Now to keep the lady’s heart, he must prove that he’s truly not the stuffy, sneaky duke he seems to be, but a lord who has simply lost his heart to the love of his life.

Taming a Duke’s Wild Rose by Tammy Andresen
Lady Rose longs for love but has a knack for searching all the wrong places. When her father betroths her to the scarred duke, is it her worst nightmare or a dream come true?

Captivated by the Captain by Amanda Mariel
Captain Jasper Blackmore has forsaken his past, walking away from England’s shores in search of a new adventure after the war left him physically scarred and jilted by the one lady he dared to love. When an American hoyden enters his life everything changes, but can he overcome his past to embrace the future?

The Duke Next Door by Meara Platt
Lady Mallory has been in love with her neighbor, the Duke of Hawthorn ever since she was a little girl and is distraught when rumors circulate of his impending marriage to an heiress. But is it possible the rumors are wrong and he is falling in love with her, the girl next door?

The Lion: Lyons of the Hebrides by Hildie McQueen

When Maddock Lyon, Laird of Clan Lyon and newly titled Duke of Tarbert, makes the horrible mistake of kissing Ealasaid Lamont, he falls helpless. He cannot allow her to leave, even if it means to be at war with a fierce neighboring clan. Amid clashes, mortal enemies and threats, the Lion is a force to be reckoned with when defending the woman he loves.

A Hidden Ruby by Dawn Brower
A duke uses his roguish charm to woo and win, a second time, the woman he loves—the wife he’d believed dead.