Thirty-one years ago, Buxly the Butcher went to trial for killing his entire family. Now Janet, a newly divorced nurse, has unknowingly purchased the place where it all took place…
Michael Robb’s paranormal/murder-mystery chiller The Butcher’s Boy: The Ballad of Billy Badass

The Butcher’s Boy: The Ballad of Billy Badass 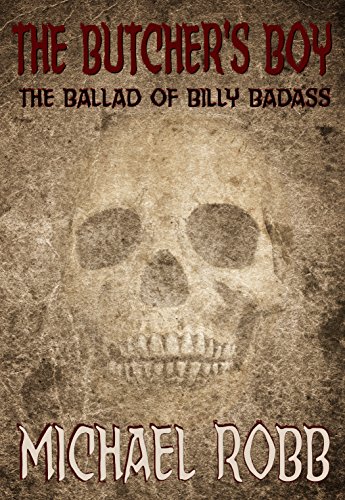 4.1 stars – 100 reviews
Kindle Price: $1.99
Everyday Price:
Text-to-Speech and Lending: Enabled
Available on Audible
Don’t have a Kindle? Get yours here.
Here’s the set-up:

Thirty-one years ago, Buxly the Butcher went to trial for killing his entire family. Now Janet, a newly divorced nurse, has unknowingly purchased the place where it all took place.

What happens when her eleven year old son and their overprotective Rottweiler learn that the place is haunted by the victims of that grisly act? Can young Michael fight through the madness and terror to figure out what really happened so long ago? If he does, maybe the tormented souls can be put to rest. If he fails, he just might become one of them. With only the help of his babysitter, a burned out house painter, and his dog, Lucy Fur, Michael is about to try. The problem is, not everyone is who they seem, even the dead.

***Content Warning: This is NOT the over-gory sort of thrasher-horror novel, but it does touch on some unsettling subject matter and should not be read by the squeamish, the easily offended, or children under the age of 18.

“…horror built as much on suspense as on the portrayal of brutality. Simple events like a thunder storm were so graphic, I felt the electricity in the air.” — The Book Keeper