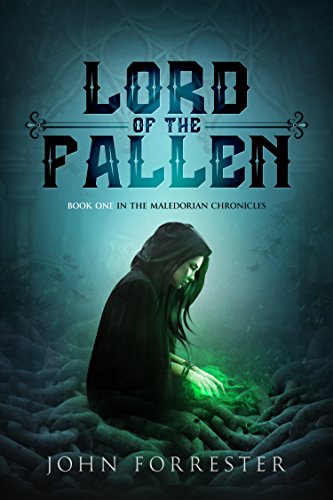 4.0 stars – 11 reviews
Kindle Price: FREE!
Text-to-Speech and Lending: Enabled
Don’t have a Kindle? Get yours here.
Here’s the set-up:

Lady Elendria witnesses the murder of a boy and discovers it is connected to a cult sweeping the city of Criswall. The cult worships Ba’al, an ancient god named the Lord of the Fallen by the city’s poorest. The cult aims to overthrow the Kingdom of Mar Thagroth and bring back an ancient empire ruled by sorcerers.

Forced to leave her childhood home a year ago, Elendria has adjusted to college life filled with people she once considered enemies. She is thrust into the court of King Galeran and attracts the attention of Prince Jondran, the king’s grandson. She is torn between her hatred of the kingdom and her growing interest in the young prince.

While investigating the boy’s murder, she discovers a dark secret about her father. Set amidst a city rife with cultists and a class war, Elendria must choose between family and her new friends. But she soon realizes the choice is really between doing what is right and pursuing revenge. 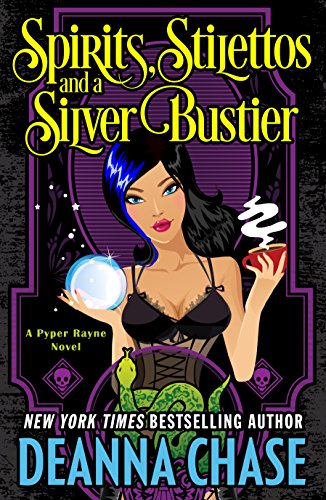 4.6 stars – 224 reviews
Kindle Price: FREE!
Text-to-Speech: Enabled
Available on Audible
Don’t have a Kindle? Get yours here.
Here’s the set-up:

From New York Times bestselling author Deanna Chase, the first book in the Pyper Rayne series (a spin-off of the Jade Calhoun Series).

All Pyper Rayne—medium and coffee shop owner—wanted was the perfect vintage dress. What she got was a dead shop owner and a sexy ghost who’s suddenly everywhere—at her shop, in her car, and even lounging in her bedroom. But he’s not just any ghost. He’s a witch and able to appear in solid form…sometimes. If only he’d stop disappearing on her.

And Pyper needs his help. When she becomes target numero uno and the prime suspect in the shop owner’s death, it appears her ghost holds the key to solving the murder. In between stolen kisses, Pyper will need to get to the bottom of all of his secrets if she wants to stay alive and out of jail…and maybe finally get that date he keeps promising her.

The Passage (The Wonderland Series: Book 1) 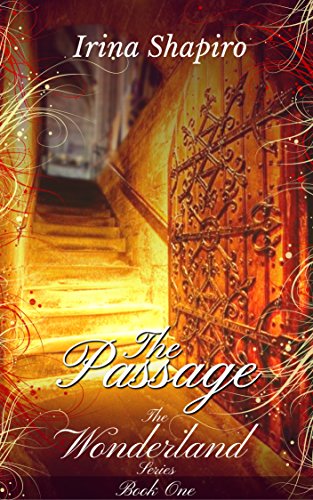 4.4 stars – 183 reviews
Kindle Price: FREE
Text-to-Speech and Lending: Enabled
Available on Audible
Don’t have a Kindle? Get yours here.
Here’s the set-up:

In the spring of 1685, Lord Hugo Everly, ardent supporter of the Protestant upstart the Duke of Monmouth, vanishes without a trace just before the Monmouth Rebellion, leaving future generations forever baffled as to what might have become of him.

In 2013, while visiting Everly Manor as part of her job as a location scout for a film production company, Neve Ashley stumbles onto a secret passage that leads her into the seventeenth century and straight into the path of the ill-fated lord. Neve is able to return safely to her own time, but she can’t forget the man she met or the fate that’s about to befall him. Against her better judgment, Neve decides to go back and warn Hugo of impending danger, not realizing that she’s walking into danger herself, for history is never straightforward, and people’s motives not always what they appear to be. Taken hostage by the very man she was trying to save, Neve is trapped in the seventeenth century, her fate now intertwined with that of her captor, and the future something that neither one of them could have envisioned. 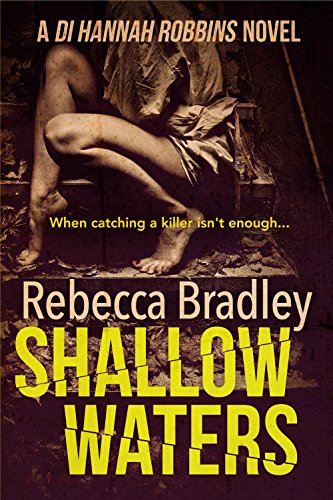 4.2 stars – 186 reviews
Kindle Price: FREE
Text-to-Speech and Lending: Enabled
Available on Audible
Don’t have a Kindle? Get yours here.
Here’s the set-up:

When catching a killer isn’t enough…

The naked, battered body of an unidentified teenager is found dumped in an alleyway and post-mortem finds evidence of a harrowing series of events.

Another teenage death with the same MO pushes DI Hannah Robbins and her team in the Nottingham City division Major Crimes Unit, to their limits, and across county borders. In a race against the clock, they attempt to unpick a thick web of lies and deceit to uncover the truth behind the deaths.

But it doesn’t stop there.

Just how far are the team willing to push themselves to save the next girl?

When Time is Cracked and Trees Cry: A mysterious novel that takes you deep into a Magical tour in the secrets of the Amazon jungle and the psychological depths of the human soul 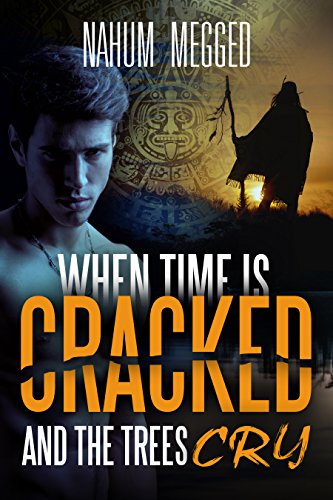 4.2 stars – 13 reviews
Kindle Price: FREE
Text-to-Speech and Lending: Enabled
Don’t have a Kindle? Get yours here.
Here’s the set-up:

Be part of a fascinating flight into the Amazon jungles!

This is a book about love, memory, yearning, and shared human destiny. An Israeli anthropologist flees his country and the bitter memories that haunt him, finding refuge in the Amazon jungles. The protagonist’s death wish opens hidden paths before him, and these lead him into the heart of the forest.

Encounter the mysteries of the enchanted, magical forest along with our hero

Xnen, the tribal leader, and Yakura, the embodiment of the forest goddess, draw him into the life of the tribe as he gradually becomes trapped in their magical world. Behind each tree, beyond every pathway that disappears into the forest, inside each sacred cave, and at the end of each night, there are mysteries he must solve, traces of magnificent lost civilizations swallowed by the forest, riddles, and prophecies.

Will he be able to unravel the mysteries of the forest and of his own existence?

When he tries to escape from this maze of secrets, he discovers he has a crucial role to play in the war between the children of the forest and the hostile, seemingly rational civilization surrounding it. He knows that only by fully dedicating himself to the conflict will he be able to solve the mysteries of the forest as well as the mystery of his own life.

Virtual Heaven: Only he can save them 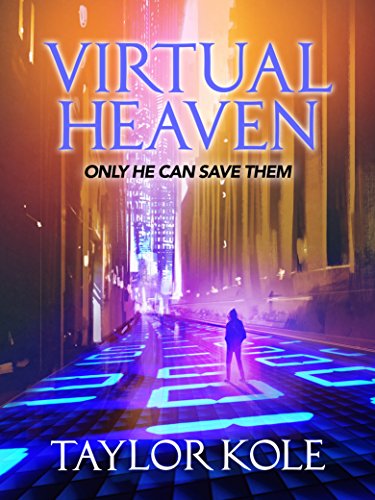 4.7 stars – 13 reviews
Kindle Price: FREE
Text-to-Speech and Lending: Enabled
Don’t have a Kindle? Get yours here.
Here’s the set-up:

Why live, when dying brings you straight to heaven?

The esoteric tech firm Broumgard pioneers a virtual reality that mirrors the best of life. Before long, people are dying to escape their humdrum days for the virtual ecstasy of the Lobby. Literally.
When the world discovers that dying while connected transfers their consciousness into a virtual heaven, people are willing to do anything to get inside.
Alex Cutler is the only one who can stop the madness he helped create, unless things have gone too far? 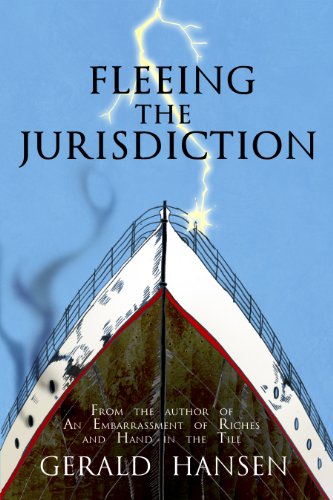 4.2 stars – 50 reviews
Kindle Price: FREE
Text-to-Speech and Lending: Enabled
Don’t have a Kindle? Get yours here.
Here’s the set-up:

PLEASE NOTE: Although this book is part of the IRISH LOTTERY SERIES, there is no cliffhanger. It is true that the characters get older as the series progresses, but each book is a complete story, and can be enjoyed without having read the previous book.

It’s danger on the high seas for the Barnetts, but will it come from the authorities, Mother Nature or family Flood?

In Wisconsin six years ago, Ursula Barnett accidentally committed a shocking crime. The statute of limitations is inching closer, and the police are circling in. Panicked, Ursula books herself and her American family passage on a budget centennial Titanic cruise, hoping to ride out the investigation and embark a woman redeemed.

But lurking amongst the leaky walls of the Queen of Crabs is a danger worse than disgruntled, poorly-paid staff, bad food and terrifying onshore excursions: her Irish family, still resentful of the Barnett’s lottery win years earlier. Sister-in-law Fionnuala Flood, knowing Ursula is a sitting duck for the next twelve days, rallies the family to retaliate, stopping at nothing to drag lady of leisure Ursula back down into the gutter that is their own life. The Queen of Crabs, though, is not Derry, Northern Ireland, but an alien battlefield, where the Barnetts and Floods find more enemies lurking outside the family than within.

Fleeing The Jurisdiction is equal parts Titanic, Love Boat and Voyage of the Damned, a darkly comic story of family relationships, the politics of envy and, perhaps, some personal redemption. 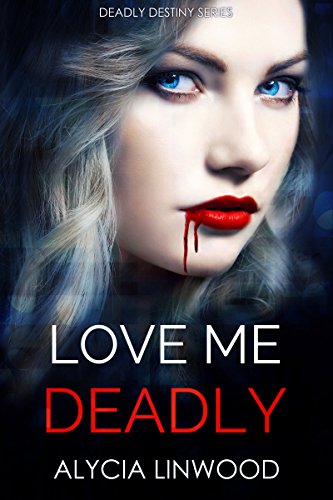 4.4 stars – 6 reviews
Kindle Price: FREE!
Text-to-Speech and Lending: Enabled
Don’t have a Kindle? Get yours here.
Here’s the set-up:

Destiny’s world is anything but ordinary, only she doesn’t know it yet. Some of her memories are missing, and the handsome and intriguing Nataniel whose attention she has caught is more than just a bartender.

After she suffers a fatal accident, Destiny is turned into a vampire by none the other than the sexy, arrogant, and infuriating famous supermodel Enrique, who expects her to be at his beck and call. Forced to abandon her dreams and plans, she has to learn to feed on humans and navigate the supernatural world. As if that isn’t hard enough, she and Nataniel find themselves on opposing sides.

But when a party goes wrong, Destiny wakes up surrounded by corpses with no idea as to how that happened, and Enrique refuses to help. Her only hope to find and stop the killer before more people die lies with Nataniel… if she’s willing to risk trusting him.

Mature content and language. Not suitable for younger readers.

The first book in the Deadly Destiny series.

The Season of Lightning 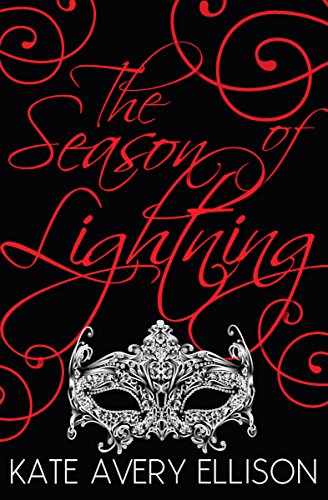 4.1 stars – 41 reviews
Kindle Price: FREE
Text-to-Speech and Lending: Enabled
Don’t have a Kindle? Get yours here.
Here’s the set-up:

Think Gone With the Wind meets Zorro and Jane Austen’s Emma in this fantasy coming-of-age story set in the middle of a civil war.

Who is the masked man known as the Hawk?

Verity Elysius is the only daughter of a famous retired general and rich plantation owner. She lives in an insulated world of wealth and privilege, where she spends her time riding her horse, sassing her lady’s companion, and being tormented by the family’s handsome but irritating nobleman friend, Lord Roth. But when a mysterious, masked vigilante called the Hawk begins stirring up trouble and freeing silvras, the oppressed lower class, Verity’s world is turned upside down as she is challenged about everything she knows about her world and her place in it. 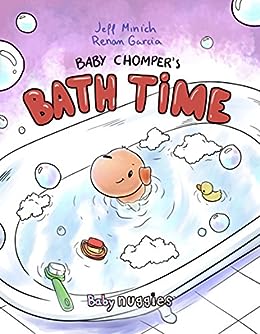 4.2 stars – 5 reviews
Kindle Price: FREE!
Lending: Enabled
Don’t have a Kindle? Get yours here.
Here’s the set-up:
Baby Chomper’s Bath Time is a bubbly and buoyant tale about a little puppy who learns to have fun doing his least favorite thing– taking a bath! One day, baby Chomper escapes from home and gets muddy and stinky beyond belief. He rolls in the mud, takes a dive in the trash, and even gets sprayed by a very stinky skunk.