eBook of The Day and Free on Kindle Unlimited! Kalen Cap’s The Ancient Tripod of Peace: A Teen Thief-Catchers Novel

The Ancient Tripod of Peace: A Teen Thief-Catchers Novel

by Kalen Cap
Kindle Price: $2.99
FREE with Kindle Unlimited– Learn More
Text-to-Speech and Lending: Enabled
Don’t have a Kindle? Get yours here.
Here’s the set-up:

Plagued by loneliness in her Lake Erie Islands community, vegan Lexi hopes to make friends in high school. But she finds her new teachers’ obvious dislike of her troubling. After relics are stolen from her dad’s museum, her priorities change.

His dad in jail, cipher enthusiast and bacon-loving Gil hopes for a clean slate as a freshman. Soon, he discovers secret codes within a Shakespearean play while paired with Lexi, pulling him into an ancient mystery.

As the official museum burglary investigation veers off track, the mismatched teen sleuths join forces to crack the case. Lexi’s inquiries and Gil’s codes capture the attention of the thieves who wield the Tripod of Peace, a relic of astounding power, sought by rival secret societies. Caught in the crossfire, Gil and Lexi encounter danger.

The Ancient Tripod of Peace is the first book in novelist Kalen Cap’s Teen Thief-Catchers Series. If you like stories with artifact treasures, fighting secret societies, and spirited protagonists, you’ll enjoy this young adult mystery.

Buy your copy of The Ancient Tripod of Peace today and join Lexi and Gil in this enthralling adventure.

Enjoy Kalen Cap’s Books? Tell us Why and Win a Free Book!
Authors and Publishers: How to Sponsor Kindle Nation Daily 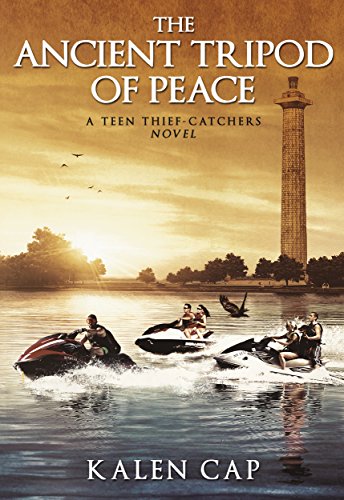