If you needed to, could you drop everything to save yourself? Because the EMP is only the beginning… Brace for Impact (Nuclear Survival: Southern Grit Book 1) by Harley Tate 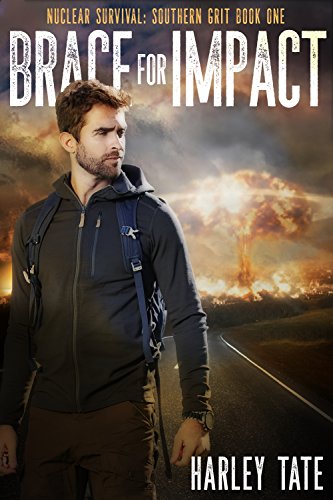 – Learn More
Text-to-Speech and Lending: Enabled
Don’t have a Kindle? Get yours here.
Here’s the set-up:
“Once you speed through this fast paced, well edited apocalyptic novel, you’ll be linked to a prequel which is also excellent. The author has mastered the Best Seller style and delivers researched detail that both informs and holds the reader’s attention. Having read copious amounts of this genre, I can genuinely say this is one of my favorite apocalypse authors.” – Amazon Review

What if an EMP is only the first strike?

With a credible threat to the United States and a plane stuck on the tarmac, Grant Walton is thirty seconds from full-blown panic mode. He’s the only one in the airport who knows the truth. When the power goes out, he can’t waste another second. It’s the beginning of the end and every man for himself.

A nuclear attack will rip the country apart.

Leah Walton is wrapping up a twelve-hour shift as a nurse in the heart of the city. When the power goes out, the hospital operates on crisis mode. She can’t stop to breathe, let alone check her messages. When she finally listens to her husband’s frantic calls, she’s faced with an impossible choice: leave or die trying.

Could you drop everything to save yourself?

Grant and Leah race the clock to find each other before the United States is plunged into chaos. When the bombs fall, their worst fears come true. Can Grant make it home in time to find his wife? Will Leah escape the brunt of the blast?

The EMP is only the beginning.

Brace for Impact is book one in Nuclear Survival: Southern Grit, a post-apocalyptic thriller series following ordinary people struggling to survive after a nuclear attack plunges the nation into chaos.

Enjoy Harley Tate’s Books? Tell us Why and Win a Free Book!