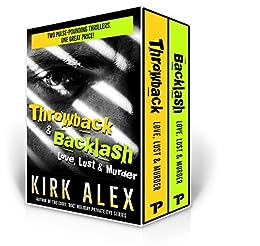 Ménage as Pressure Cooker.
About to boil over. . .

Book One: Throwback
It started innocently enough with a dead car battery and a mean Pyrenees mix. But before the day was done, Fred Reed, a Midwestern boy with a troubled past looking for a fresh start in California, was in love. The only thing standing in his way is Margie’s husband, Frank, a bounty hunter, who Fred happens to work for. She can’t leave him, and Fred doesn’t see himself as a murderer, although the bruises on Margie are becoming harder to ignore.
Margie’s scheme to make Frank’s death look like an accident seems like the perfect plan. But murder is best served neat, and lust and greed make for a potent cocktail that’s liable to combust. Now Fred’s caught up in a dangerous scheme that’s quickly spiraling out of control, as he proves he’ll do anything for love and money.

Fast-paced and full of twists and turns, Kirk Alex’s first book in the crime thriller series, Love, Lust and Murder, will keep readers turning the pages long past midnight.

Payback.
It’s the name he gives the stray pit bull intent on following him around. And what’s on Fred Reed’s mind when he gets out of jail fifteen years after taking the fall for a slipshod murder.

The pre-dug graves are ready, one for each of them. The detective who put him away and the two women he once loved.
The hunt is on. But this time, they’re the hunted.
Kirk Alex dishes up another helping of vengeance, deception, and suspense in the riveting second book of his crime noir thriller series, Love, Lust and Murder.