The Saved Series: The Complete Collection 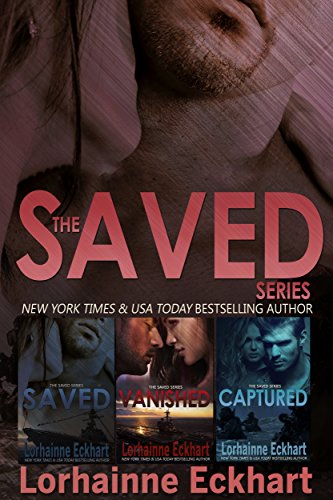 Kidnapped and pregnant, Abby finds salvation in the arms of naval captain Eric. Can he keep her safe as danger rages around them? Follow their heart-pounding journey in this complete collection from a NY Times & USA Today bestselling author!

If you like The SAVED SERIES you might also enjoy THE McCABE BROTHERS, NOW A USA TODAY BESTSELLER! Join the five McCabe siblings on their journeys to the dark and dangerous side of love! An intense, exhilarating collection of romantic thrillers you won’t want to miss.
“It takes a horrible, but real tragedy and shows how love can be a true healer. We need more men like the Captain!!” Reviewer, Spring Hale

—”Eric is a hell of a man. Abby is one hell of a strong woman and their story is absolutely romantic!”

—“Eckhart knocks one out of the park with this great story.” RT Book Reviews

OVERVIEW:
SAVED: “Growing up I had dreams that one day I’d fall in love, get married and start a family. Then one night I was taken. But I survived, I escaped and I was saved. Eric didn’t see me as damaged. He didn’t see my baby as a monster. He protected me, he kept me safe … he saved me.”

VANISHED: In VANISHED, Abby has married the man of her dreams. He rescued her, and he’s the father of her child. Everything should be perfect, but she begins to relive her nightmare from when she was taken… and one night she disappears, leaving her children alone in the dead of night, her husband on a military ship halfway around the world. But when Eric arrives home and the search begins, there are two disturbing questions: Was someone in the house? And how is it possible for Abby to simply vanish?

CAPTURED: Captain Eric Hamilton is now settled on base after giving up his first love, the sea, for his wife, Abby, and their children. He watches day in and day out as his friends are deployed, burning with an empty feeling as if life is passing him by—that is, until his friend Lieutenant Commander Joe Reed is captured while deployed in Iraq.

While his family is at home, helpless, Joe’s life hangs in the balance, and Eric is forced to make a decision he swore he would never make again: Should he leave Abby and their children to go halfway around the world in search of a friend who may be dead?

If you enjoyed THE SAVED SERIES, here are some of my other series you may also enjoy:
THE OUTSIDER SERIES: An Emotionally charged romance series beginning with the Amazon Bestseller, The Forgotten Child.
THE FRIESSENS: A NEW BEGINNING: The return of The Friessen men and the women they love in this emotionally charged Family Saga which follows THE OUTSIDER SERIES.
THE WILDE BROTHERS: Come and meet the Wilde Brothers of Idaho. Joe, Logan, Ben, Samuel, and Jake. You’ll love the western flair and hot men and strong women in this romantic family saga.
WALK THE RIGHT ROAD SERIES: “The Choice will leave you questioning your own morals and motivations and leave you asking others what they would do in that same situation. This is a genre-bending novel that will surprise you” from JRA.
“Rarely have I spent time reading a series that had me feeling every thought and emotion.” From Mary Ellen

A dark, compelling new thriller from bestselling authors Sarah A. Denzil and Anni Taylor: Poison Orchids
How did paradise turn so ugly?
Book 6 of the award-winning series now available! Shadow Moon: Book VI of the Huntress/FBI Thrillers by Alexandra Sokoloff.
Mass killer Cara Lindstrom is in the wind, after a deadly encounter which leaves FBI Special Agent Antara Singh questioning her own sanity and fitness to serve.