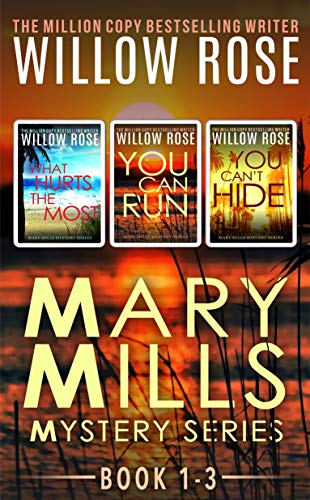 – Learn More
Text-to-Speech and Lending: Enabled
See more titles by Willow Rose
Here’s the set-up:
Readers love this series – More than 1000 five-star reviews on Amazon and Goodreads.The first three books in the engrossing series on sale a limited time.˃˃˃ WHAT HURTS THE MOST, BOOK 1:You will never guess the ending!Am I pretty?Imagine being asked that question standing face to face with a killer. What would you answer?While her life is going from bad to worse, journalist Mary Mills receives a phone call from her father telling her that her brother has been arrested for murder. Mary decides to go back to her hometown of Cocoa Beach, Florida, which she left twenty years back and has never visited since.Working with her old friends from the 7th Street Crew, she tracks down the most disturbing and surprising killer this town has ever faced before a shocking conclusion turns everything upside down for them.Determined to solve the murder and to have her brother acquitted, Mary is forced to face demons from her past she never thought she would have to again.˃˃˃ YOU CAN RUN, BOOK 2:It’s not the kind of thing you’d expect to happen on an ordinary Saturday morning.Her kids are arguing, and her husband is still sleeping. Lisa is tired and wonders why her husband keeps working late. Is he having an affair? Is it the same girl as last time?Lisa’s teenage daughter is acting up, and just as Lisa is about to walk up to her room and tell her who’s the boss around here, she feels the cold steel of a gun pressed against her cheek, while a hand covers her mouth.Years later, it remains a mystery. Who killed Lisa’s family after holding them captive for twenty-four terrifying hours in their house?Mary Mills is enjoying her new life in Cocoa Beach. She is back with her husband Joey and the rest of the 7th Street Crew that she grew up with. She is writing a blog and doing pretty well for herself when she realizes one of her best friends; Marcia is in serious trouble.It is well known within the crew that Marcia likes to drink a lot, but things are getting worse. Marcia is deep in over her head, and she risks losing her children. Soon Mary realizes that maybe she doesn’t know her old friend as well as she thought.It is said that a friend will help you if you’re knocked down, while a real friend says, “Stay down; I’ve got this.”Will Mary be able to live up to this? Will she be able to help Marcia, to save her before it is too late? Does she want to after she digs deeper into Marcia’s story and finds out who she really is?˃˃˃ YOU CAN’T HIDE, BOOK 3:Young girls are being kidnapped, and so are their mothers. They are being bought and sold as slaves. Behind these kidnappings stands a ghostly person who calls himself the Boxer. He finds the girls and their mothers online, where he stalks and chats with the girls until he decides who to pick up and sell.A new reign of terror has fallen on the unsuspecting residents of Cocoa Beach. They think their worst nightmare is the environmental catastrophe causing the thousands of dead fish in the river until the first body turns up among the dead fish.Mary Mills’ personal life is in chaos. She is trying to balance being a divorced mother and dealing with the presence of her ex-husband’s new girlfriend in her, and especially her son’s, life.Mary gets on the trail of the disappearing mothers and daughters, and when she finally thinks she has it all figured out, it becomes clear that nothing is what it seems.Meanwhile, Mary’s brother Blake is preparing an attack on her, and before she knows it, she is the one who desperately needs the help from her friends in the 7th Street Crew.Every bit as pulse-pounding as her other books You Can’t Hide, delivers further proof that Willow Rose is the most addictive thriller writer around.The fourth installment Careful little eyes is out now.

A young woman inherits a business empire in this sequel to the #1 NYTimes –bestseller A Woman of Substance…. Hold the Dream by Barbara Taylor Bradford
From Hugo and Nebula winner Theodore Sturgeon comes a seeming utopia: a world with only one gender and no poverty, pollution, or war—but at what cost? Venus Plus X by Theodore Sturgeon