By Kindle Nation on September 13, 2019 in Romance of The Day

Thrill of the Chase (The Parker Sisters Book 1) 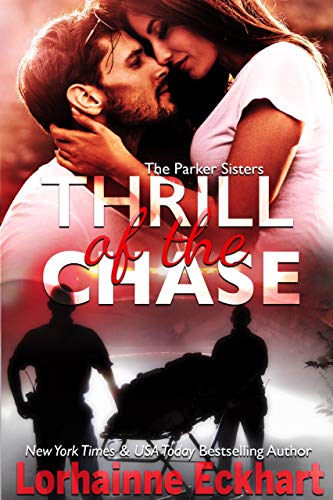 He stopped for an accident and stumbled upon the one woman he’d been looking for all his life.

From a Readers’ Favorite award-winning author and the “queen of the family saga” (Aherman) comes The Parker Sisters, a new spinoff of the Married in Montana series.

To everyone who doesn’t know her, dependable EMT Taz Parker is strong, capable, and confident. However, everything about her job terrifies her. She lives in a small Wyoming town, with five sisters, an overprotective father, and no dating prospects on the horizon, considering the lack of available men in the area. That is until one rainy night, while transporting a patient to the next town, she stumbles upon an accident.

Jerry O’Rourke is only passing through town when he witnesses a roadside accident. When he stops to help at the grisly scene, there’s only so much he can do, so he flags down a passing ambulance. A pretty EMT stops to help, and Jerry is unable to resist her.

Even though he lives in another state, Jerry seeks out Taz just one more time—but what he encounters is a naive young woman from a big family. Taz is beautiful and innocent, and he wonders where she’s been all his life. When he sets his sights on her, he soon realizes that the strong ties Taz has with her family could make having her far more difficult than he could have ever imagined.

Lorhainne Eckhart, Thrill of the Chase (The Parker Sisters Book 1)

A mysterious package containing an emerald brooch catapults Army Captain Kenzie Wallis-Manning back in time to England in May of 1944…
Katherine Lowry Logan’s time-travel romance The Emerald Brooch
Does the perfect wife and the perfect husband make for the perfect marriage? Erin Cawood’s gripping psychological thriller TAINTED LOVE