By Kindle Nation on September 13, 2019 in Kindle Daily Deal

Daughter of Kronos: Descendants of the Gods 1 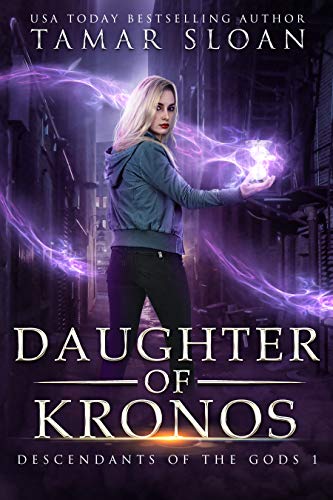 – Learn More
Text-to-Speech and Lending: Enabled
Enjoy Tamar Sloan Books? Tell us why and WIN a chance for a FREE ebook!
Here’s the set-up:

She has the power to stop time. He just became her reason to restart it.

There’s only one thing Kadence has ever wanted—to leave the painful life she’s been forced to endure, and join her father in Olympus. When Kronos comes to her with a mission, Kadence seizes the opportunity to use her demigod powers to earn the right to go to him.

All she has to do is figure out who’s messing with people’s timelines. Good people are dying before they should, others are living beyond their allocated minutes. But as fates are irrevocably changed and darkness appears at every turn, Kadence finds herself wondering—is the world even worth saving?

Her only ray of hope is Micah, a guy with no past or family. Mysterious, philosophical, and confidently optimistic, Micah shows Kadence that for any light to be seen, darkness must be present. For the first time, love has Kadence doing something she’d never imagined…believing.

It’s when her world of demigod responsibilities collides with the darkness she’s fighting that Kadence must make a choice. Does she still want to go to Olympus if it means leaving Micah behind?
And when the unthinkable happens—how will she use her powers?

Because Kadence has the ability to stop time. It’s whether she wants to restart it that will become the question.

The unforgettable first half of a Descendants of the Gods duology, Daughter of Kronos is the beginning of an unforgettable love story by USA Today Best-Selling Author Tamar Sloan!

*Please note, cannot be read as a standalone. Secret of Fate is where this love story finishes.*

Descendants of the Gods

Demigods as you’ve never seen them before.

Duologies that will touch your heart.

Daughter of Kronos: Descendants of the Gods 1, Tamar Sloan

One close-knit family. Too many secrets…. This novel is based on an actual unsolved murder case.
Don’t Tell (Jack Ryder Book 7) by Willow Rose
When love drives you to war and war drives you to addiction, the journey home can be long and twisted…
Finn Again by Lynda Meyers