by Alaric Thain
2.6 stars – 3 reviews
Kindle Price: FREE!
Everyday Price:
Text-to-Speech and Lending: Enabled
Available on Audible
See more titles by Alaric Thain
Here’s the set-up:
Alaric Thain’s “History of the 21st Century” recounts the events of the pivotal 21st century in a way that can be understood by people of the 29th century, who live in what might considered a progressive utopia. Alaric Thain was born in 2064 but travelled extensively at relativistic speeds until he returned to Earth and wrote his seminal work in 2864. His point of view is unique, as he is able both to understand the motivations of 21st-century humans and explain them to 29th-century humans.
The “History of the 21st Century” is divided into three sections. The first section summarizes the history of humanity from the emergence of the species through to the dawn of the information age. By laying the foundations of primitive human thought, 29th-century readers can better appreciate the often perplexing motivations and reasoning of their ancestors. The second section looks at the history of the information age in detail, from its start, in 1998, to the closing of the last fossil fuel power plant in 2070, encompassing the “singularity”, the American culture wars and the advent of fusion power. The third section explains three key archaic concepts that are typically difficult to understand for 29th-century readers: politics, economics and religion.
The History of the 21st Century tells a tale of drama and resolve, of trial and error, from the nearly disastrous experiments in populism typified by the presidency of Donald Trump to the heroism and nobility of people like Destiny Holt and Mukantagara Mporera. It was the vision and courage of leaders such as these that allowed us to weather the catastrophes that threatened us and achieve the “second enlightenment” by the end of the era.
The book has been brought to 2019 so as to provide an example to contemporary people of what might be the most favorable outcome imaginable, the one in which Alaric Thain had the opportunity to look back and write his history. Painfully aware of the extremely fortuitous events in his own timeline, he collaborated with Artie, the web-based artificial intelligence of his time, to bring about the publishing of his book over eight hundred years earlier, in August of 2019, with the intention of inspiring as many favorable futures as he could across the branching timelines of existence.

“The account Thain gives of developments in our future is believable, rationally derivable from our past and our current situations, and presents hopeful possibilities for the improvement of the human condition… All in all, this is an absolutely fascinating look at our world through the eyes of another. ALARIC THAIN’S HISTORY OF THE 21st CENTURY is an intriguing, clearly-written, and thoughtful look at our world from the perspective of a happier future, without many of our current struggles.” – IndieReader (5-star review, IR Approved)

“Author Thain takes readers through a summary of human society up to the current moment before engaging most directly with some of the pressing social concerns of the present, like global warming, wealth inequality, populism, and technology. In speculating about how these issues play out over the coming decades, he deftly reinforces the idea of how seriously readers should take them in the present and delivers several captivating concepts.” – Kirkus Reviews 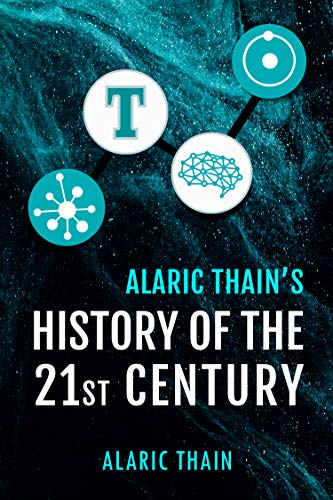 5-in-1 BOXED SET ALERT! Second chance romance, mistletoe weddings, and even a splash of miracles with the promise of a happily ever after…
A Small Town Christmas Anthology by Ciara Knight
Funny. Sexy. Emotional best friends to lovers romance: The Edge Of Reason by USA Today bestselling author J. Saman