By Kindle Nation on November 7, 2019 in Amazon Prime

When you think Agatha Christie and trains, you naturally think of perhaps her most famous work, Murder on the Orient-Express. But Christie also wrote another rail-themed novel starring her famous fictional Detective Poirot, Mystery of the Blue Train.
Larry Olmsted with Forbes looks at the word’s most luxurious train… Support our news coverage by subscribing to our Kindle Nation Daily Digest. Joining is free right now! 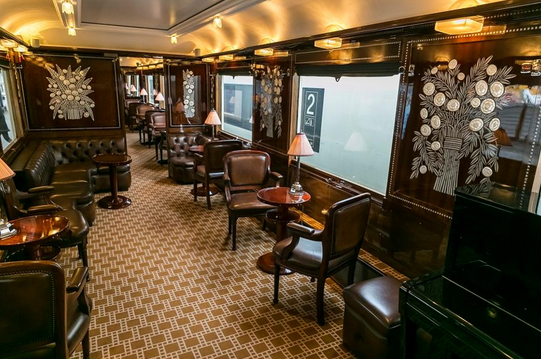 Here’s where things get confusing.

At the time, the Blue Train was a luxury French rail trip running the entire breadth of France, North to South, from Calais on the English Channel to the Riviera. However, it no longer exists, and the name is better known today for another luxury overnight rail trip, this one from Cape Town to Pretoria in South Africa. To further confuse matters, this new luxury murder mystery based on the original French Blue Train trip will be on the recently – and painstakingly – restored Orient-Express, but not the better known Venice Simplon Orient-Express that has been run for years by Belmond Luxury Hotel, Trains, River Cruises and Safaris. I’ve ridden that version of the Orient-Express, which typically travels between London and Paris, and it is great, as are Belmond’s other vintage luxury trains worldwide, especially the over the top Royal Scotsman. This Orient-Express consists of a set of original carriages now owned by French Railway company SNCF, which also owns the rights to the name Orient-Express. Got it?

For rail buffs this is an important distinction as SNCF spent more than $15 million (according to the Daily Mail) restoring the cars to the glamour and elegance of the 1920s, with polished wood, sumptuous upholstery, and original antique fixtures. Yet since then, the gorgeously historic train has rarely used – it ran only once last year. For the most part it is a historic and impressive showpiece that sits on display in the station in Paris and has no scheduled service. That makes this one-off special event an even more special experience for both murder mystery fans and rail buffs, who can follow in the footsteps of previous Blue Train passengers such as Charlie Chaplin, Coco Chanel, Winston Churchill and F. Scott Fitzgerald.

When a ball drops down a sewer grate, the lives of three kids are changed forever! Madame X and the World Beneath by Eileen Conway
A street thief rises to power to save a kingdom despite wellborn enemies in the first book of this fast-paced fantasy series! Red Jack (The Jack of Magic Book 1) by Alex Linwood