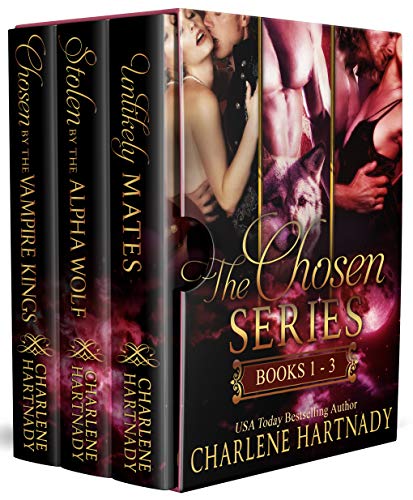 – Learn More
Text-to-Speech and Lending: Enabled
Enjoy Charlene Hartnady Books? Tell us why and WIN a chance for a FREE ebook!
Here’s the set-up:
Box Set of three full-length novels

Book 1: Chosen by the Vampire Kings
Bestselling MFM Vampire Novel
Every hundred years, tradition dictates that all eligible females in Sweetwater assemble for the choosing ceremony. Two vampire kings have separate territories within the surrounding countryside. Both are eager to pick their future brides.

What a waste of her freaking time.

Tanya is among the many women at the choosing ceremony. As far as she’s concerned it’s an outdated, sexist event and if it wasn’t mandatory she so wouldn’t be there. It’s not important that the two males are ridiculously rich and handsome.

Deep down she knows a plain Jane like her will never be picked by one of the kings anyway. Many of the women in the town square are beautiful and model thin. Most seem enthusiastic about being a queen, even if it means being mated to a blood sucker, which suits her just fine.

Imagine her surprise though when King Brant sets his sights on her. Once a vampire king has decided, there’s no going back. But her home is in Sweetwater. Being forced to live amongst the vampire species…big gulp…forced to mate with a vampire…is not what she had in mind for herself. Maybe she can convince him to let her go, to pick again. If not, she’ll have to find a way to escape his – very muscled and rather delicious – clutches.

Book 2: Stolen by the Alpha Wolf

The arrogant vampire kings have always proclaimed themselves to be the rulers of all the non-humans making war between the species inevitable. In order to win, it is imperative that the shifters steal the chosen human female. The alpha wolf will take her for himself thus weakening the position of the bastard kings. No heirs means no future for the vampires.

Something Ward didn’t bank on was that the yellow bellied elves would turn tail forcing the wolves to flee or face defeat.

In desperation, one of Ward’s pack members grabs a female vampire taking her with him to the wolves’ hideout. The alpha is forced to take responsibility of the female until the dust settles…there are things that she may not find out about the shifters…things that would put them at further disadvantage against the vampires. In a few short days he’ll take her back to Sweetwater himself. It soon becomes clear that being in such close proximity to this refined, delicately beautiful creature is pure torture. A few days suddenly feels like a lifetime. How he longs to be able to get under her skin and make her lose a little bit of that ironclad control she’s so desperate to hold onto. It doesn’t help that some of the shifters want her dead whilst others wouldn’t mind taking her for themselves. Shifter females are in short supply.

After one glorious night, the wolf shifter, Rushe considers the human doctor to be his. His. Damn. It. Unfortunately, he must bide his time before being permitted to pursue Becky.

The vampire, on the other hand, wastes no time in going after what he wants, namely, one times lush human. The scent of another male on her skin only incites Ross further to eradicate the shifter from her mind, by whatever means necessary. Take what is mine…

Becky knows that Rushe has his heart set on finding a mate. Since she made it crystal clear that it won’t be her, she’s sure he’s moved on. On the rebound, even though she won’t admit it to herself, it leaves her free to explore her deepest, darkest vampire fantasies. Only, it’s not quite as freaking simple as she thought it would be…

Be warned, the stories contain strong sexual themes/language and are not intended for readers under the age of 18. (There are scenes of ménage)

Amazon is offering some kids movies and TV shows for free as families stay inside amid the coronavirus outbreak
Julia, a woman who had once walked with Mary Magdalene and taught alongside Paul, must preserve the legacy of the apostles in the face of terrifying danger…
The Mystery of Julia Episcopa by John I. Rigoli and Diane Cummings