“We serial killers are your sons, we are your husbands, we are everywhere”-Ted Bundy

Inspired by a true story.

He came in the morning when they were still making lunches and getting ready for school and work. He killed them all – mother, father and children. Brutally slaughtered them in the comfort of their own home.

They called him the Monday Morning Killer.

That was forty years ago, but now it is happening again. A mother and her daughter are brutally murdered in their house, on a peaceful Monday morning in Cocoa Beach, Florida.

Detective Jack Ryder has enough on his plate being home alone with six kids and his wife – country superstar Shannon King – on tour. This case takes his anxiety to a new level when he realizes the crime scene matches unsolved murders from four decades prior. He worries that a deranged serial killer has returned to Cocoa Beach.

No one feels safe, especially not the girl next door, who just bought the house where the first family was killed forty years ago.

Who is capable of such cruelty? And why?

Could one person be responsible for these brutal killings of entire families so many years apart? Or is Jack dealing with a copy-cat? You’ll never guess the shocking answer.

With intense twists and nerve-wracking tension, GIRL NEXT DOOR is a chilling and horrifying look into the minds of serial killers. If you like tales based on true stories, nerve-wracking tension, and twists you won’t see coming, then you’ll love Willow Rose’s nightmarish mystery novel. This mystery novel is precisely the type of book that earned her the nickname the Queen of Scream.

GIRL NEXT DOOR is the fifth book in Willow Rose’s popular Jack Ryder series but can be read as a standalone. 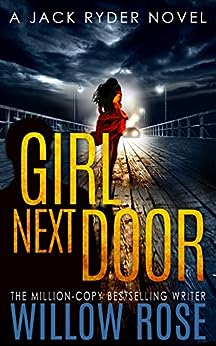