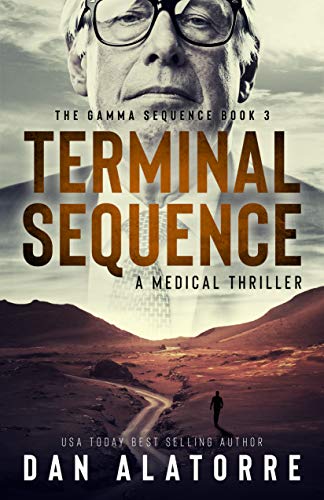 – Learn More
Text-to-Speech and Lending: Enabled
Enjoy Dan Alatorre Books? Tell us why and WIN a chance for a FREE ebook!
Here’s the set-up:

FORGET EVERYTHING YOU THOUGHT YOU KNEW

While preparing for his final round of life-saving treatments, Detective Hank DeShear agrees to work with intelligence agent Jaden Trinn and a ruthless killer known as The Greyhound to shut down the remaining legs of Angelus Genetics’ illegal, death-plagued genetic engineering program.

But the company Dr. Hauser founded plans to continue operating, buying political protection and stopping any would-be attackers in the harshest, most permanent ways possible. When the next generation of Hauser-created child prodigies learns of the founder’s true plans, a sinister reality is revealed that no one could possibly have envisioned.

As their team members are systematically hunted down and murdered, DeShear and Trinn wonder if either of them will survive long enough to finally end Hauser’s death-plagued program—or if it will end them.

FANS OF ROBIN COOK AND MICHAEL CRICHTON WILL LOVE THIS FAST-PACED SERIES, ESPECIALLY THE FINALE!

Free Book Alert for Thursday, March 26: Five freebies for Kindle!
“I tried to hoard at Whole Foods the other day, and came away with two steaks and a pouch of dried coconut.” David Sedaris is not very good at this.