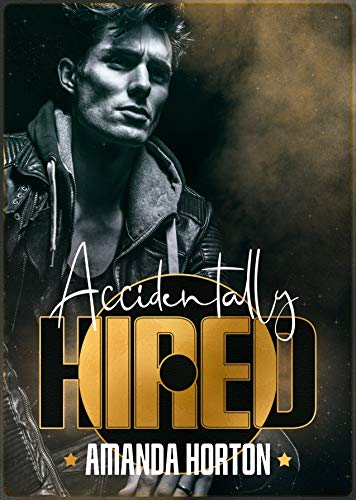 My plan was simple: enjoy Paris, see the city I loved, return to the States and start my fabulous art career.

Mark Acorsi had to ruin it all.

He had piercing blue eyes and a jawline to die for. He was romantic and adventurous. He was sweet and daring. He was everything I ever wanted.

He had the confidence and strength of someone who ruled the world.

Turned out, that was because he did.

Rich, powerful Mark Acorsi didn’t need me, so he used me and left me in the dust.

As much as I hated this man, I couldn’t seem to avoid him.

Six years later, I was offered my dream job—then found out he owned the company. If that weren’t bad enough, he was already trying to get me fired.

I wouldn’t quit just because my worst nightmare was in charge. I was going to show him that he couldn’t ruin my life again.

But he’d do his best to make it hell for me.

He’d do his best to make it impossible for me to resist him. 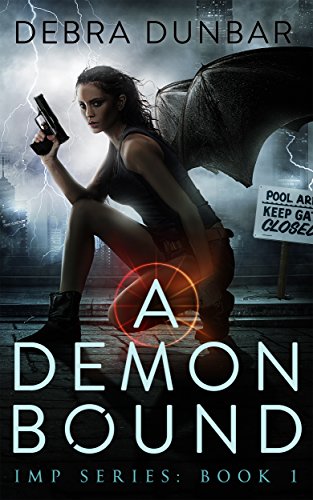 4.4 stars – 704 reviews
Kindle Price: FREE!
Text-to-Speech and Lending: Enabled
Available on Audible
Enjoy Debra Dunbar Books? Tell us why and WIN a chance for a FREE ebook!
Here’s the set-up:

All Samantha Martin wants to do is drink beer by the pool, play mischievous pranks on the humans, and get her hot neighbor in the sack—oh, and avoid the angels who won’t hesitate to execute her on sight.

But when her naughty hellhound lands her in trouble and she’s blackmailed into catching a killer, Sam finds herself in the crosshairs of the very beings that want her dead. Run to Hel and give up all the earthly pleasures she’s learned to love? Stay and face a certain death? Or use her impish wiles and hope to survive?

WARNING: This completed series has laugh-out loud antics, an OCD werewolf, and a sexy angel. Get ready to binge read! 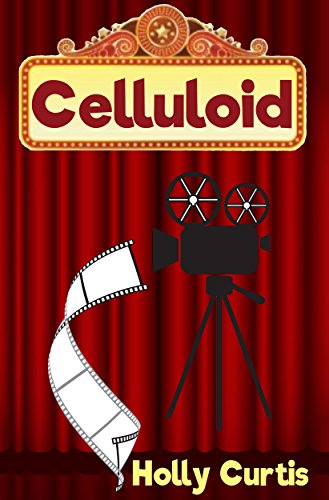 Jimmy Clifford is a thirty-year-old movie addict and film memorabilia shop owner. He is also very fed up. He is fed up with his best friend Oswald’s stupid, made-up card games, his drug dealer Pluto’s novelty drugs are losing their novelty and his anti-depressants don’t appear to be working anymore.

But when he discovers that the Crypt – a local, independent cinema that he regards as his ‘spiritual home’ – is to be demolished, he feels compelled to act. Getting together with his friends and a fellow shop owner they decide upon an idea – there will be a ‘Save the Crypt’ cabaret night (featuring local performers) to highlight the situation and raise money in the process.

All Jimmy has to do for his part is get out and find seven acts in two months – not so easy when you’re an agoraphobic and you’re up against giant egos and a psychotic property developer.

We Can Do It!: Stories for Brave Little Kids: Children’s Book Collection 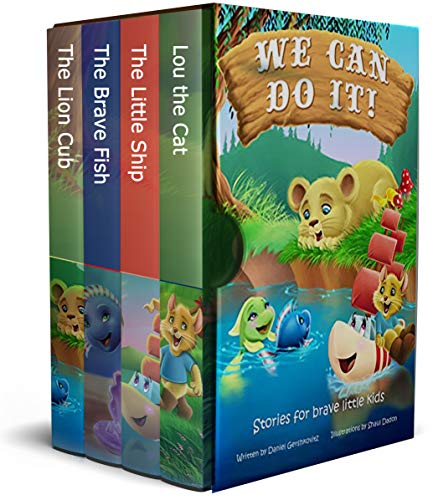 “All your dreams can come true if you have the courage to pursue them” – Walt DisneyWith so many diverse new challenges facing our children every day, one of our central roles as parents is to provide them with the correct, appropriate tools to deal with the outside world.

We Can Do It!: Stories for Brave Little Kids will fill your kids with the conviction that where there’s a will, there’s a way, enhancing their sense of self-confidence, capability and self-esteem:

The Lion Cub: Kids will learn to distinguish between good and bad, take responsibility for their decisions and embrace diversity.

The Brave Fish: Kids will learn not to give up on their dreams and do all they can to make them come true.

The Little Ship: Kids will learn that a big, brave, determined heart can defeat even a rival who looks better on paper.

Lou the Cat: Kids will learn not to succumb to peer pressure and to follow their heart in order to make the best decision.

Our children are our most precious treasure. Let’s help them grow into the best possible version of themselves. 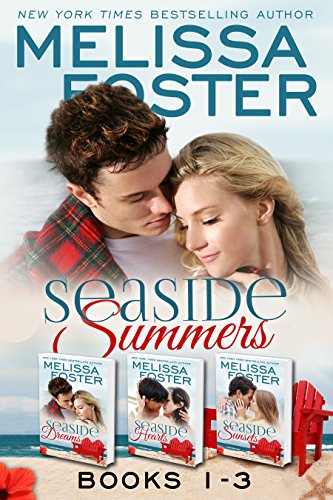 Seaside Summers features a group of fun, sexy, and emotional friends who gather each summer at their Cape Cod cottages. They’re funny, flawed, and will have you begging to enter their circle of friends.

IN SEASIDE DREAMS
Bella Abbascia has returned to Seaside Cottages in Wellfleet, Massachusetts, as she does every summer. Only this year, Bella has more on her mind than sunbathing and skinny-dipping with her girlfriends. She’s quit her job, put her house on the market, and sworn off relationships while she builds a new life in her favorite place on earth. That is, until good-time Bella’s prank takes a bad turn and a sinfully sexy police officer appears on the scene.

Single father and police officer Caden Grant left Boston with his fourteen-year-old son, Evan, after his partner was killed in the line of duty. He hopes to find a safer life in the small resort town of Wellfleet, and when he meets Bella during a night patrol shift, he realizes he’s found the one thing he’d never allowed himself to hope for–or even realized he was missing.

After fourteen years of focusing solely on his son, Caden cannot resist the intense attraction he feels toward beautiful Bella, and Bella’s powerless to fight the heat of their budding romance. But starting over proves more difficult than either of them imagined, and when Evan gets mixed up with the wrong kids, Caden’s loyalty is put to the test. Will he give up everything to protect his son–even Bella?

***
IN SEASIDE HEARTS
Jenna Ward is vivacious, spontaneous, and confident–except when she’s around the man who stole her heart years earlier, strikingly handsome, quiet, and reliable Pete Lacroux. After years of trying to get his attention and overwhelmed from dealing with her mother’s new cougar lifestyle, Jenna’s giving up on Peter–and is ready to explore other men.

As the eldest of five siblings, with an alcoholic father to care for, boat craftsman Pete Lacroux always does the right thing and has no time for a real relationship. He’s looking forward to seeing his friend Jenna, a welcome distraction who’s so damn sexy and so painfully shy that she equally entertains and confuses him.

When Jenna picks up a hard-bodied construction worker, jealousy ignites Pete’s true feelings, and he’s powerless to ignore the desires for Jenna he never realized he had. But Pete’s not the quiet guy he appears to be, and his life is anything but conducive to a relationship. Can Jenna handle the real Pete Lacroux–the sexiest, most passionate alpha male she’s ever seen–or will she crack under pressure? And can Pete reclaim the life he once had without tearing apart his family?

***
IN SEASIDE SUNSETS
Jessica Ayers has lived a sheltered life with little more than cello lessons and practices taking up her day. Now a member of the Boston Symphony Orchestra, she escapes the prim and proper symphony to vacation in the Seaside community in Wellfleet, Massachusetts, and determine if she is living life to the fullest or missing it altogether.

For the first time since developing the second largest search engine in the world, billionaire Jamie Reed is taking the summer off. He plans to work from the Cape and spend time with his elderly grandmother–and falling in love is not in his plans.

From the moment Jamie and Jessica meet, the attraction is white-hot. Once-overly-focused Jamie can think of little else than sensual, smart, and alluring Jessica, and Jessica discovers a side of herself she never knew existed. But when Jamie’s business encounters trouble and his attorney and best friend intervenes, he proves that the blond beauty is too distracting for Jamie. To make matters worse, it appears that Jessica might not be who she says she is, turning Jamie’s life—and his heart—upside down. In a world where personal information is always one click away, Jamie must decide if he should trust his heart or watch the woman he loves walk away. 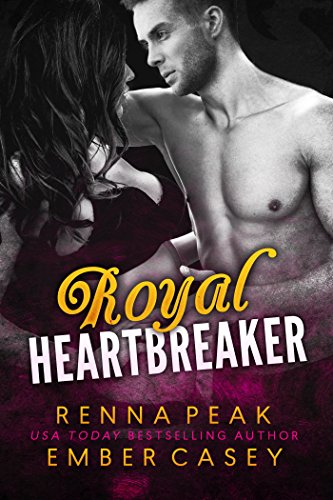 This playboy prince is about to meet his match…but can he put his bad boy ways behind him?

When I accidentally wished for my own Prince Charming, I never expected him to actually show up.

But life never is as simple as making a wish—and while Prince Leopold is definitely charming, he’s also cocky. And arrogant. And a huge playboy. He’s everything I’ve promised myself I’d stay away from.

So why can’t I seem to resist him?

Fairy tales and happily-ever-afters don’t happen in real life. Not to ordinary girls like me, anyway. And certainly not with a royal bad boy who’s obviously harboring a whole bunch of juicy secrets.

But I can’t help myself.

As my life becomes entangled with Prince Leo’s in ways I never could have imagined, I’m forced to wonder: could he be the hero of my dreams? Or is this cocky prince just going to break my heart?