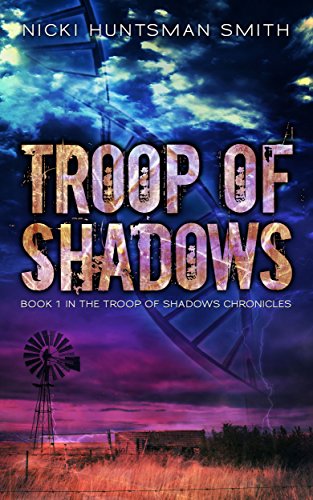 – Learn More
Text-to-Speech and Lending: Enabled
Available on Audible
Enjoy Nicki Huntsman Smith Books? Tell us why and WIN a chance for a FREE ebook!
Here’s the set-up:

It’s a post-apocalyptic world now. Everyone the pandemic left behind is…special.

Survivors of the deadly pandemic possess diverse, savant-level talents, are intellectually gifted, or both. A handful of others possess even more impressive and mystifying qualities. Everyone has some form of psychological issue, ranging from minor anxiety disorders to full-blown psychopathy.

No technology, no medicine, no law and order. And there’s more to surviving than just filling your belly…you have to dodge a few crazies along the way.- Isaiah believes he is destined to rule the devastated world. Promise him loyalty and you live. Refuse and you die.

– Dani refused. Isaiah and his followers will not give up until they hunt her down. Her death will be intentionally slow, painful, and public — an example to his followers.

– Pablo watched as the love of his life was murdered. He isolated himself in the Arizona desert, alone with his grief, until he was discovered by someone he may have to kill.

– Steven, a prepper in Kansas, was ready for this new world. Now, those who survived the pandemic, want everything he worked so hard for. Preppers must be ready to defend themselves. He knew that long before everyone else.

A year later they know now that not dying from the pandemic was the easy part.

The lives of these survivors from California to Texas…Arizona to Oklahoma, are all connected. And they don’t know it.

Now a year later, they navigate a bleak world. No technology, no medicine and no laws. They must unify their diverse strengths not only to rebuild civilization, but to battle those who would forge empires through brutality and oppression.

“There is one who would rule the world or see it burn.”

Troop of Shadows combines Prepper fiction, pandemic survival and SHTF survival into a fast paced multi point of view saga. It has a Stephen King’s “The Stand,” kind of vibe along with part Hugh Howey’s “Wool” series and part Markus Sakey’s “Brilliance”.

Intricately plotted, superbly paced, and brought to life by fully-developed protagonists, quirky supporting characters, and charming villains, the Troop of Shadows Chronicles is a tour de force. It is the unfolding story of the greatest threat humanity has ever faced, and is populated with some of the most entertaining, and deadly people you’ll ever meet.

It’s a page turner so don’t read this in bed if you need to get much sleep.

Yoga is for every body, including yours! Yoga For Everyone: 50 Poses For Every Type of Body by Dianne Bondy
You’ve never read a love story as twisted as this… The Perfect Girlfriend: A Novel by Karen Hamilton