Fans of Dan Brown, Clive Cussler, or James Rollins have we got something for you! The ancient world is not what we thought. Tomb of the First Priest: A Lost Origins Novel by A. D. Davies

Tomb of the First Priest: A Lost Origins Novel 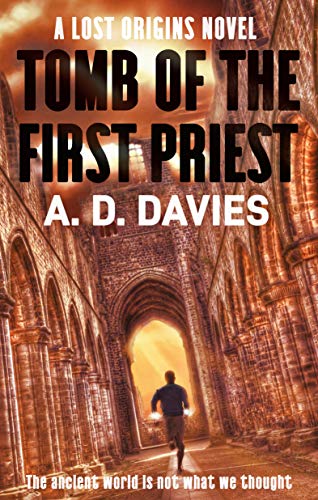 The ancient world is not what we thought.

In the city of Prague, freelance treasure hunter Jules has finally located the bangle stolen from his dying mother, an artifact that may unravel a centuries-old secret: the location of an ancient tomb hidden from the world by one of Christ’s disciples.

But when a reclusive, ruthless billionaire beats him to the artifact, Jules joins forces with an institute of unconventional archaeologists who reveal to him clues penned two thousand years ago. Clues that support the claim his mother’s bangle holds properties that science cannot explain.

And Jules appears to be the only person who can activate them – a responsibility that will tempt him toward the dark path he has avoided all his life.

As both parties race to decipher the bangle’s origins, they uncover a trail meant only for the holiest of men, leading to an apostle’s manuscript, the hunt for a tomb alleged to conceal great power, and a breathless, globe-trotting adventure that threatens to destroy them all.

From Prague to London, Europe to Asia, Tomb of the First Priest launches the Lost Origins series, each book charting a new story exploring gaps in humanity’s long history.

“This is Dan Brown on steroids!”

Tomb of the First PriestSecret of the Reaper Seal

Curse of the Eagle Plague

Note, this novel was previously published by KindlePress under the title “Tomb of Aradia” by author name “Antony Davies”. The three first books in the Lost Origins series have been republished under new titles and a new author pen name, and contain minor editorial tweaks from the original texts. Original titles were The Reaper Seal and The Eagle Plague.