From the New Yorker: J.F.K.’s “Profiles in Courage” Has a Racism Problem. What Should We Do About It? Support our news coverage by subscribing to our Kindle Nation Daily Digest. Joining is free! 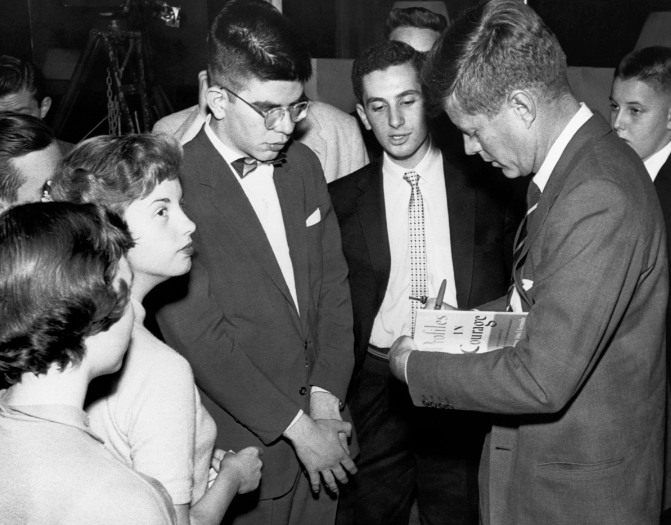 Every so often I hear from the descendants of Adelbert Ames, a Union general during the Civil War and then the governor of Mississippi during Reconstruction, objecting to a paragraph about him in John F. Kennedy’s book “Profiles in Courage,” from 1956. “No state suffered more from carpetbag rule than Mississippi,” Kennedy wrote, about Ames’s governorship. Corruption was rampant. Taxes rose by a factor of fourteen. “Vast areas of northern Mississippi lay in ruins.” None of this is true, and the Ames family has been lobbying the Kennedy family to change the offending paragraph pretty much continuously for more than sixty years—including an in-person discussion with J.F.K., in 1963, conducted in the White House by Ames’s great-grandson George Plimpton, the writer and editor of The Paris Review. Nothing has worked. But maybe now, at this moment of a great national reconsideration of our history and our monuments, especially on racial grounds, it might be different?

I’m getting these entreaties, most recently a couple of weeks ago, because I wrote a book about the bloody overthrow of Reconstruction by white terrorists in Mississippi in 1875. Ames is a leading character, presented far more positively than he is in “Profiles in Courage.” Since what happened during the Reconstruction period has never been very firmly fixed in American memory, some explanation is probably required. What was Ames doing in “Profiles in Courage” in the first place, and why was he—a white politician elected by an overwhelmingly Black constituency—offered up by Kennedy as a villain?

“Profiles in Courage” was published when Kennedy was thirty-eight years old. He was the junior senator from Massachusetts, in the early stages of planning his campaign for President in 1960. The main body of the book is eight profiles of United States senators whom Kennedy considered to have been extraordinarily courageous, starting chronologically with John Quincy Adams, in the early nineteenth century, and ending with Robert A. Taft, in the mid-twentieth century. It’s irresistible to think about the book in the light of Kennedy’s political ambitions. Thanks to his heroic and well-publicized exploits as a Navy officer in the South Pacific during the Second World War, courage was already identified as one of Kennedy’s salient qualities, and the framing device for the book underscored that. The courageous subjects were distributed pragmatically, considering that Kennedy was a regional politician preparing to go national. Two were from the Northeast, two from the South, and four from the Midwest. Three were Republicans. They stood for a broad range of political causes.

An ordinary snapshot causes a mother’s world to unravel in #1 NYTimes bestselling author Harlan Coben’s shocking thriller: Just One Look
In the lush, forested world between the earth and sky, sometimes it takes only a little thing to disrupt your concept of reality, forever…
The Journey by E. A. Bagby