When Tris and Zestine first meet, she saves his life as he flees an ambush orchestrated by his own flesh and blood… Verge of Corruption: A Love’s Warrior Novel by P.C. Stevens 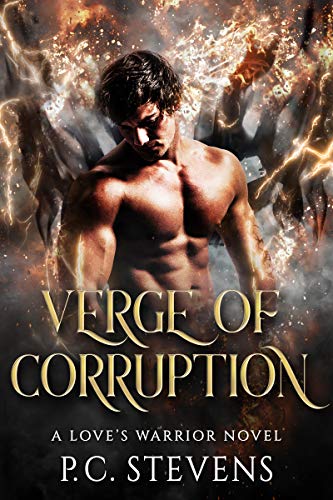 ***Finalist/Award of Honorable Mention In Recognition of Excellence in Romance Writing: 2019 Fiction From the Heartland contest by Mid America Romance Authors.***

When Tris and Zestine first meet, she saves his life as he flees an ambush orchestrated by his own flesh and blood.

The Light-blooded son of a deity, Tris is gifted with wings as well as telepathic and telekinetic abilities. Zestine is a feline beast who can turn into any cat, large or small, ferocious or tame, of her choosing.

By order of the king and queen, the newly acquainted duo embark on a spy mission. Some of Tris’s brethren have willingly traded their Light for the Darkness, and they’re to investigate the unprecedented metamorphosis. To the Dark Dimension they venture, straight into the heart of enemy territory. Their façade requires Tris to masquerade as one of his Dark kin while he and Zestine pose as lovers.

The path to victory is perilous. By surrounding himself in Darkness, Tris’s Light weakens. Though she’s a top predator and feared by most immortals, it’s not long before Zestine finds herself powerless and close to breaking.

Yet they’re not without a glimmer of hope, as even while they suffer atrocities that stem from the blackest of nightmares, their feelings for each other inevitably deepen. And in their world, love is much more than an emotion. It’s a weapon the enemy can neither perceive nor anticipate.

This book contains subject matter that some may find triggering and/or disturbing. However, there is NO violence/dub-con/non-con between the hero and heroine.

It’s not necessary to read From Here to Eternity: Love’s Warrior Book One before reading Verge of Corruption.