Giveaway time! Brought to you by a Kirkus Book of the Month Selection! Off The Reservation by Glen Merzer: Enter and get the scoop on our weekly giveaways where you pick the prize

And to say thank you here is a bonus entry word: nice

You can help keep the party going by checking out…

Off the Reservation: A Novel 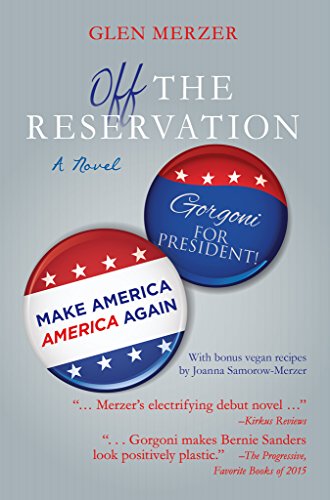 In a narrative rich in humor and uproarious dialogue, Off the Reservation explores modern presidential politics and whether honesty can find a place within it. Congressman Evan Gorgoni of Bloomington, IN, has served eight terms in a dysfunctional Congress and reached his limits of frustration. A medical event brings on the epiphany that there is no point in continuing to serve. But his frank expression, on Meet the Press, of his rationale for ending his political career is met with the unbidden call that he seek the White House—an unlikely destination for a vegan Congressman with a disdain for political posturing.

Featuring 20 vegan recipes and a solution to America’s Electoral College problem, Off the Reservation is an original take on the art of the possible.

“Glen Merzer’s Off the Reservation is as politically savvy and poetically literate a book as I have read in a long while. It is a completely gorgeous and rewarding experience.”–Jason Alexander, Actor

“The book is called Off the Reservation, but it’s 100% On The Money about how far removed political discourse has strayed from reality. With unparalleled wit and insight, Glen Merzer dispatches one Evan Gorgoni to go forth and speak the truth to a weary nation, and the result is one of the best reads I’ve had in years. I loved it!”—Ed Begley, Jr., Actor/Environmental Activist

“I literally couldn’t put down this superbly-written book once I began to read. Why? Because Off the Reservation is wildly entertaining and deeply inspiring. And because I laughed out loud so many times I lost count. What a fabulous, powerful, meaningful book!”—John Robbins, author, Diet For A New America, and Co-founder, foodrevolution.org

“Off the Reservation is the best book I’ve ever read!”—Howard F. Lyman, author, Mad Cowboy

“Glen Merzer’s Off the Off the Reservation is a masterpiece of wit and relevance. Twenty-first century America is portrayed here in the language of politics—an unlikely feat but a convincing one, thanks to Merzer’s keen eye for both straight facts and tortuous contradictions. Intelligent, relevant, up-to-date, and unwavering, Merzer’s fictional analysis gets to the heart and soul of American society today. I confidently predict that anyone who has the good fortune to read this book will treasure the experience.”—Philip Appleman, poet and novelist