Giveaway time! Brought to you by Just the Truth: A Political Thriller by Gen LaGreca. A newswoman battles a powerful bureaucracy to keep journalism, a free press—and truth—alive.

Sponsors like Gen LaGreca help us to keep offering you free giveaways.

Go to Giveaway Central to enter and get all the latest information on the KND/BookGorilla weekly giveaways where you pick the prize!

And to say thank you here is a bonus entry word: bright

You can help keep the party going by checking out

Just the Truth: A Political Thriller 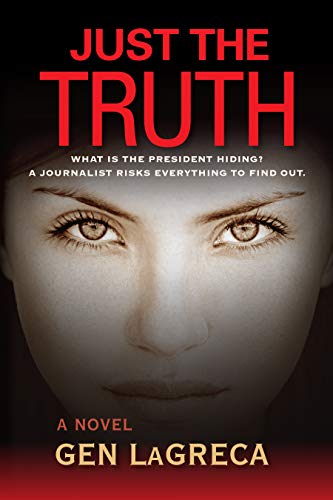 “Our society needs more entertaining novels that bring to life the importance of a responsible and independent press, an accountable government, and the rule of law. JUST THE TRUTH does just that. This book isn’t only for those who care about modern threats to our country’s founding principles, but for anyone looking for a great political thriller.” CARRIE LUKAS, President, Independent Women’s Forum

“[W]e need more real-life Laura Taningers to find the truth wherever it hides.” THE EPOCH TIMES

A newswoman battles a powerful bureaucracy to keep journalism, a free press—and truth—alive.

Set in Washington, DC, in the near future, JUST THE TRUTH portrays the threats to a free press in the era of growing, unchecked government and the indomitable spirit of one journalist who risks her career, her reputation—and ultimately her life— to uncover a plot that just might subvert free elections in America.

JUST THE TRUTH is a political thriller and murder mystery that explores a pivotal issue facing America today: What is happening to truth in journalism? Are we in danger of losing it? This riveting drama raises questions and issues that concern us all. The novel examines how abuses of power can undermine our foundational freedoms, and it promises to have a profound and lasting impact on its readers.

“Find the truth, wherever it hides” was the slogan of firebrand newspaper mogul Julius Taninger (JT) in the mid-20th century. Then, politicians feared his scathing editorials. Now, 70 years later, with JT deceased and his son Clark and grandchildren Irene, Billie, and Laura Taninger running the company, have the tables turned? In modern-day America, does the press—and the broader business community—still have the freedom to criticize public officials, or do those officials have the power to silence their opponents? Laura Taninger is about to find out.

As the president of Taninger News and host of its prime time television show after the death of her intrepid grandfather, Laura becomes the sole journalist to hold President Kenneth Martin’s administration accountable. The signature program of his administration, SafeVote, puts control of national elections in the hands of the federal government, rather than letting the states manage the voting in their own jurisdictions. SafeVote is scheduled to launch with the upcoming presidential election in which Martin hopes to win a second term. Laura suspects foul play when she discovers a $400 million line item in the SafeVote budget allocated to pay an elusive company for performing undisclosed services.

James Spenser, who was Laura’s source within the administration, had vital information for her but was gunned down before he could reveal it. Facing the crushing retaliation of her political enemies against her family’s businesses, a smear campaign to destroy her reputation, and the intense pressure of her family to give up her investigation, Laura persists in her inquiry into Spenser’s murder and the secrecy surrounding SafeVote. As she gets closer to unraveling the mystery, she realizes that the facts point to shocking revelations about the man whose memory haunts her, the man who was her greatest business competitor and her most passionate lover—until he betrayed her and the ideals they shared. With Election Day looming and the country at a crossroads, Laura is determined to pursue the truth wherever it leads.

With controversies abounding about the integrity of today’s journalism and elections, JUST THE TRUTH could not be more timely.