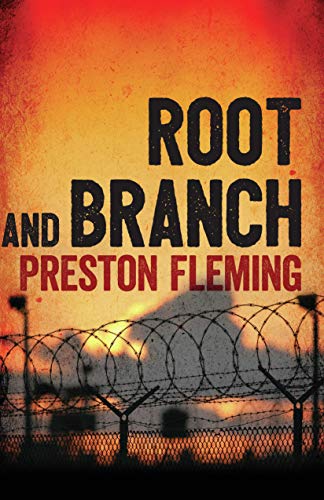 “Intelligent and indelible. A shrewdly written tale with a robust cast of characters and a frightening intifada in the U.S.” KIRKUS REVIEWS (Starred Review)

“Thriller fans with a taste for politics will devour this exciting investigation into dangerous government overreach and the mangling of civil liberties in a time of crisis.” BOOKLIFE by PUBLISHERS WEEKLY (Editor’s Pick)

“Preston Fleming has crafted a brilliant novel…that delves into the question of human rights in the face of governments overstepping their bounds.” PACIFIC BOOK REVIEW (Starred Review)

“ROOT AND BRANCH is a powerful book evoking memories of post 9/11… A book to be read and deeply pondered.” SAN FRANCISCO BOOK REVIEW (Star Rating 5/5)

“A relentlessly entertaining, sophisticated and intelligent political thriller that is a must-read for fans of Ken Follett, Robert Harris and Daniel Silva.” BESTTHRILLERS.COM

ROOT AND BRANCH is a realistic thriller set in a near-future America where an Islamist-inspired intifada triggers emergency security measures that go terribly wrong.

Roger Zorn, owner of a French private security company, is delighted at having won a lucrative contract with the U.S. Department of Homeland Security (DHS) as part of the government’s new program of emergency security measures. The measures are launched when the U.S. military response to sneak attacks by Iran and Pakistan on America’s electrical grid provokes a wave of Jihadist-inspired violence across the U.S.A.

Zorn’s work for DHS requires him to apply his company’s Triage risk assessment technology to evaluate terrorist suspects captured in the U.S. and sort out the jihadists from nonviolent Muslim residents. But when Zorn’s inquiries lead him to discover that DHS and its lead contractor have been manipulating Triage scores to deport massive numbers of Muslims and is ‘disappearing’ the most violent ones, Zorn faces a choice.

Will he say nothing and sell his company to DHS’s prime contractor before scandal breaks, or will Zorn step up to expose the abuses and risk bringing the full wrath of America’s national security establishment down on his head?