There’s a little something for everyone in today’s FREE book alert! Six great titles to choose from! 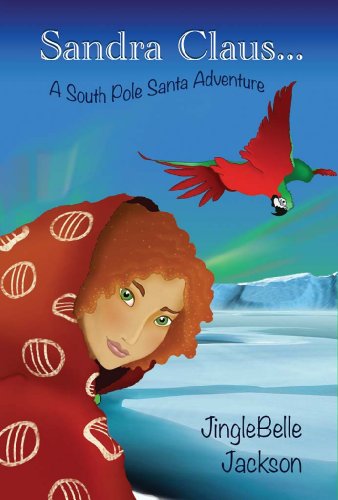 – Learn More
Text-to-Speech and Lending: Enabled
Enjoy JingleBelle Jackson Books? Tell us why and WIN a chance for a FREE ebook!
Here’s the set-up:
After 17-year-old Cassandra Penelope Clausmonetsiamlydelaterra… pulled off the win of the century by landing the new position of South Pole Santa, she thought her life would launch into constant good times. After all, being Santa Claus is just about the best job ever. Sandra doesn’t get much time to celebrate, though, before people everywhere – adults and children – start objecting to her selection. The Protest has been launched across the globe and if she can’t change their minds – and fast – her new position may be gone as quickly as it came! Not-to-mention, she has to learn all there is to know about being Santa, get the new village underway at the South Pole, decide on her transportation, help Santa prepare for Christmas, tour the world, organize elves – her to-do list is longer than her last name! On top of everything else, there’s dark magic lurking just waiting for Sandra to turn eighteen, worrying everyone who loves her.
Like JingleBelle Jackson’s first book in the South Pole Santa series, The Search for South Pole Santa, this is a book full of magic and mayhem. You’ll find old and new friends, surprises, romance, small and large adventures and one really big dragon. Christmas lovers of all ages will enjoy this fun-filled romp that travels from pole-to-pole and all around the world. It’s a tale filled with twists and turns that capture our traditional Christmas stories and gives them a new sense of wonder. 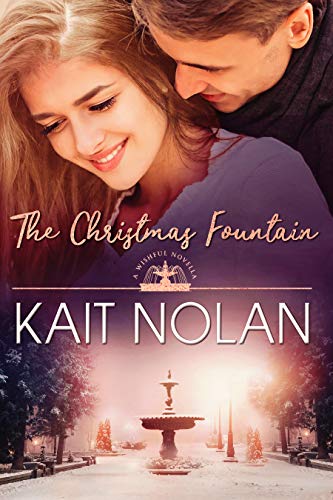 4.8 stars – 145 reviews
Kindle Price: FREE!
Text-to-Speech and Lending: Enabled
Available on Audible
Enjoy Kait Nolan Books? Tell us why and WIN a chance for a FREE ebook!
Here’s the set-up:

Elementary school teacher Mary Alice Reed wanted a nice, stable guy to share her happily ever after. When she thought she’d found him, everyone tried to tell her that the guy she thought was her Mr. Right, was really Mr. Somebody Else’s. Living with a town’s worth of I-told-you-so isn’t easy, but she’s coping. And definitely taking a break from love in order to get past her last disaster to chair her favorite Christmas charity.

Trauma surgeon Chad Phillips gave up the intensity and long hours of a big city hospital to move to Wishful. He wants a home and family, a town with a slower pace, where he can actually build a life. Being one of Wishful’s most eligible bachelors has gotten him a lot of pie and casseroles, but it hasn’t helped him find that special someone to come home to.

When a friend’s accident lands Mary Alice in his ER, Chad finds himself more than intrigued. Part Martha Stewart, part Mary Poppins, and all Girl Next Door, she’s exactly what he’s been looking for. Volunteering for the Fountain of Hope charity seems like the perfect way to get to know his Christmas crush. But just as he seems to be overcoming Mary Alice’s once bitten, twice shy caution, that one tiny thing from his past, that he probably should have told her about, shows up for a Christmas season visit. Chad’s gonna have some explaining to do. 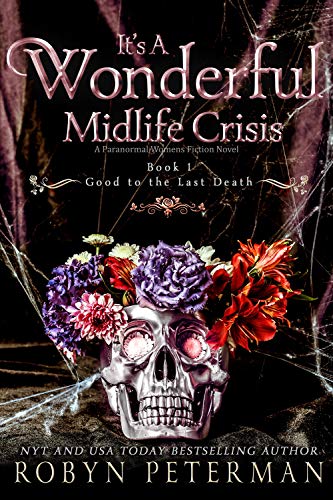 – Learn More
Text-to-Speech and Lending: Enabled
See more titles by Robyn Peterman
Here’s the set-up:
A Paranormal Women’s Fiction with a bit of class, and a lot of sass, for anyone who feels like age is just a number!

Whoever said life begins at forty must have been heavily medicated, drunk, or delusional.

Thirty-nine was a fantastic year. I was married to the man I loved. I had a body that worked without creaking. My grandma, who raised me, was still healthy, and life was pretty damned good.

But as they say, all good things come to an end. I’d honestly love to know who ’they’ are and rip them a new one.

One year later, I’m a widow. My joints are starting to ache. Gram is in the nursing home, and dead people think my home is some kind of supernatural bed and breakfast. Gluing body parts onto semi-transparent people has become a side job—deceased people I’m not even sure are actually there. I think they need my help, but since I don’t speak dead, we’re having a few issues.

To add to the heap of trouble, there’s a new dangerously smokin’ hot lawyer at the firm who won’t stop giving me the eye. My BFF is
thrilled with her new frozen face, thanks to her plastic surgeon, her alimony check, and the miracle of Botox. And then there’s the little conundrum that I’m becoming way too attached to my ghostly squatters… Like Cher, I’d like to turn back time. Now.

Whatever. I have wine, good friends, and an industrial sized box of superglue. What could possibly go wrong?

All in all, it’s shaping up to be a wonderful midlife crisis… 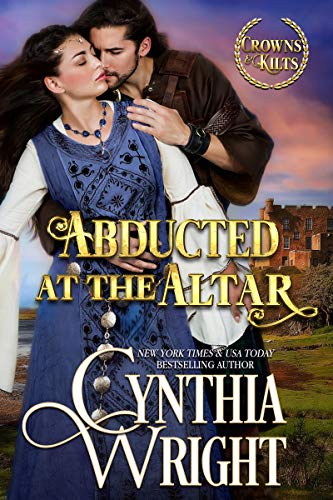 – Learn More
Text-to-Speech and Lending: Enabled
Available on Audible
Enjoy Cynthia Wright Books? Tell us why and WIN a chance for a FREE ebook!
Here’s the set-up:

From a New York Times bestselling author comes a captivating romance of 16th century Scotland!
FORBIDDEN LOVE
When a spirited Scottish lass crosses paths with a charismatic Outlander, sparks fly that threaten to set fire to their separate worlds…
Vibrant Fiona MacLeod has never left the Isle of Skye, except in the pages of cherished books. However, everything changes when her mother makes a deathbed request that Fi travel to Falkland Palace and experience the royal court. It may be her last chance to see the world before she is married off to an overbearing Highland warrior.

Across the ocean in Europe, architect Christophe de St. Briac enjoys a perfectly-ordered life. He’s a rising star among the artistic builders of the Renaissance and has his pick of women to warm his bed – until King François I pressures him to accept a project at Scotland’s Falkland Palace.

Although Fiona and Christophe are from different worlds, they soon find their passionate souls have everything in common. But while they seem to be on a collision course with destiny, dark forces are conspiring to keep them apart… 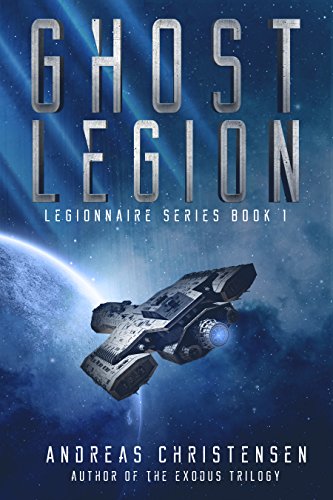 18 years ago they came to destroy us…

A race of conquerors from deep space had set their eyes on Earth´s riches. Their invasion slaughtered billions…
But humanity united under a common leadership and fought back. We chased them off Earth and most of the Solar System.

The war still rages on, and every year young people are sent out to die, far away from Earth.

Ethan Wang was born on the day of the invasion, during the chaos and turmoil of war, and now he´s ready to join the fight. But first he has to become a soldier, and survive his initiation into one of the toughest military units Earth ever mustered, the Ghost Legion.

With Ghost Legion, Andreas Christensen kicks off the Legionnaire Series, a military science fiction set in the near future. Suit up, and get ready for a roller coaster ride into space!

The Stepsister: A gripping psychological thriller with a wicked twist 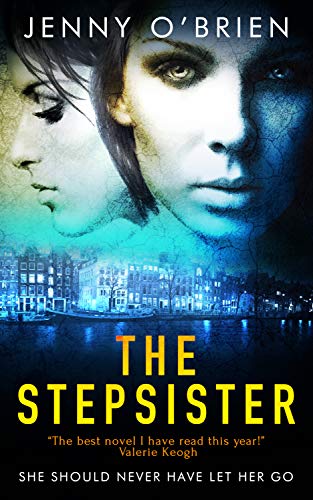 – Learn More
Text-to-Speech and Lending: Enabled
Enjoy Jenny O’Brien Books? Tell us why and WIN a chance for a FREE ebook!
Here’s the set-up:

What readers are saying about Jenny O’Brien…

‘Chilling and Twisted’, Woman and Home.

When a stranger leaves stepsisters, Victoria and Ness, a half-share in a house in Holland, they think it must be a mistake. But there’s no mistake when Ness goes missing. Desperate for the truth, Victoria travels from Guernsey to Holland to find out what’s happened to her. Has she, as her texts show, embarked on a whirlwind romance? Has someone abducted her or even worse? What she doesn’t know is there’s someone watching, and that person wants her dead. Can Victoria find out the truth before it’s too late?

The Stepsister is an unputdownable psychological thriller about the family ties that bind but also strangle. Perfect for fans of Gillian Flynn, A.J. Finn and The Silent Patient