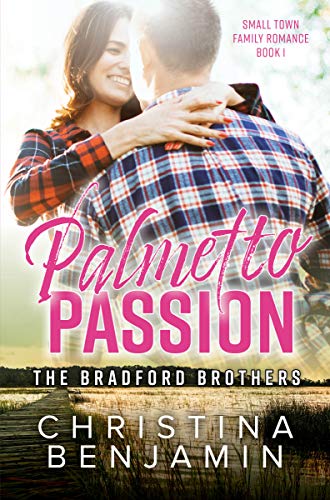 – Learn More
Text-to-Speech and Lending: Enabled
Enjoy Christina Benjamin Books? Tell us why and WIN a chance for a FREE ebook!
Here’s the set-up:

Can they learn to love again?

Heartbroken after losing the love of his life, Rowan Bradford returns home to South Carolina looking for solitude. Unfortunately, his little sister is making that impossible. When she decides to host her wedding at their parents’ estate, all three of the Bradford Brothers return home for an unforgettable event.

Bradford Cove wasn’t Tess Taylor’s destination after leaving Chicago, but her Jeep had other plans. One smoking engine later, she found herself stranded in the adorable small town. Car trouble may have brought her there, but her heart made her stay. Well that and her new job at the local florist shop.

When she lands the Bradford wedding for the tiny florist shop, Tess thinks she may have just found her calling and a fresh start. That is until she meets Rowan. He’s everything she wants, but that’s exactly why she can’t have him.

Tess has sworn off men after her last epic breakup and Rowan is sure he’s already had and lost his one shot at love. Forced to work together to pull off the wedding of the century, will these two open up their hearts for a second chance at love?

If you enjoy sweet romance in a small southern town then you’ll love The Bradford Brothers.