Senators are being murdered. From both sides of the aisle. A bipartisan hitman wreaks havoc in Washington… All The Good Men by Craig N. Hooper 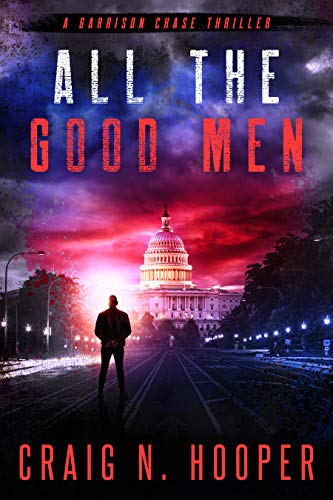 – Learn More
Text-to-Speech and Lending: Enabled
See more titles by Craig N. Hooper
Here’s the set-up:
Senators are being picked off. One by one. From both sides of the aisle.
A bipartisan hitman is on the loose, and one man will risk everything to stop the killing.
“A twisty, intrigue-packed political thriller.” BestThrillers.comThis fast paced, action packed series stars a hero who’s skilled like Ryan and relentless like Rapp.

Garrison Chase has done it all: As a sniper in the Marines. A covert government operative. An agent for the Bureau. Now he’s opted for a quieter life doing occasional jobs for his friend’s Washington, DC security firm. His latest job: protecting a United States senator from a threatening colleague.

But that assignment turns deadly when Chase barges into a private meeting between the two senators and discovers a bloodbath.

Though it looks like a murder-suicide, Chase is convinced it’s a setup. Someone else must’ve been at the meeting. But nobody believes him. Not the local police or the feds. Everyone wants the case wrapped up neat and tidy.

When more senators are targeted, one murdered and another abducted, Chase realizes incredibly powerful men—both inside and outside the government—will do anything to hide their shocking crimes.

With dark secrets and a deep cover-up at play, Chase must tap into his considerable skills and no fail attitude to bring down the most powerful men in the country. Because if United States senators are fair game in this murder-for-hire conspiracy, then no one is safe.

What readers are saying:

“This is a suspenseful page burner loaded with intensity and fun.”

“Story full of twists, turns, and surprises. The ending is amazing.”

“Even though this is the third book in the series it can very well be read as a standalone.”

“A riveting thriller with copious amounts of action, twists, and edge-of-your-seat thrills.”