4-in-1 BOXED SET ALERT! Five centuries ago, a million children were offered up as slave tribute to Earth’s alien overlords. This is the story of their descendants’ fight for freedom… The Human Legion Deluxe Box set 1 by Tim C. Taylor 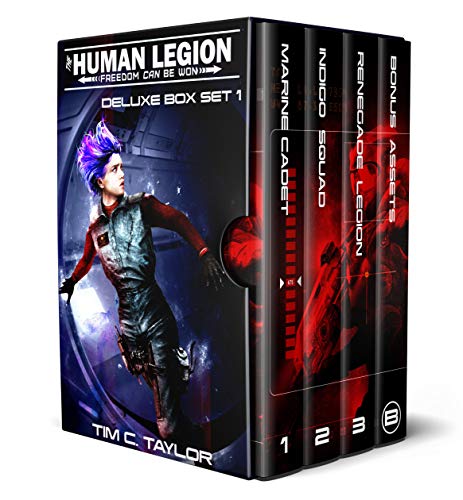 Grimdark space war, exotic aliens, friendships tested and not always holding true, vast space battles and up-close-and-personal marine bayonet action: the annals of the Human Legion has all this in abundance and more.

Most of all, the story of the Legion is one of hope, a flickering flame of belief that all the pain and loss will lead to a better galaxy. That freedom can be won.

With hundreds of thousands of sales worldwide, and three spin-off series, the Human Legion Universe is one of the essential space opera adventure series of recent years, perfect for fans of Warhammer 40k, the Ark Royal series and everyone who wishes for cruel galactic empires to fall.

Join the Legion today! With over 350,000 words of the best Sci-Fi adventure in this set, there’s never been a better time to enlist.