There’s war in the streets. No one is safe as bodies fall and houses go up in flames. Jocelyn’s War: A Novel Journeys Down a Long Dark Road by Jason Ryan Dale 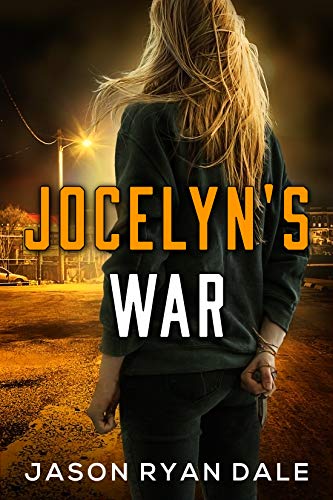 – Learn More
Text-to-Speech and Lending: Enabled
Enjoy Jason Ryan Dale Books? Tell us why and WIN a chance for a FREE ebook!
Here’s the set-up:
“Family drama, violence, and a femme fatale make this thriller appealing to fans of mafia stories.”
-Booklife Reviews

There’s a war in the streets. The vicious Ghost Knights biker gang, suddenly flush with cash and guns, is challenging the Mob for control of the city. No one is safe as bodies fall and houses go up in flames.

Danny Rinker is a young Mob soldier, but he’s keeping his distance from the fighting. Encouraged by Jocelyn, his new girlfriend, Danny spends his days in the local bar he finally owns after years of struggling. While his friends are out making names for themselves, Danny finds in the velvety touch of Jocelyn’s lips all the action he’ll ever need.

From a chance encounter, Danny learns a secret that goes to the heart of the Ghost Knights’ newfound power. If he can unravel a twenty-year-old mystery, Danny will be the one who takes the bikers down once and for all.

But Jocelyn is not all she appears. She knows things about this war that her lover can’t even imagine. Danny is about to discover that Jocelyn is a warrior, and even if it breaks her heart, she will carry on her fight to the end.

Journeys Down a Long Dark Road

But some people aren’t interested in staying out of trouble. There are fortunes to be made in the backstreets and shady barrooms, if you can stay alive long enough to get your hands on it. Many restless souls from this forgotten place have struck out from the safe path and traveled down a long, dark road.

Journeys Down a Long Dark Road is a series of standalone crime stories set in a shared world.