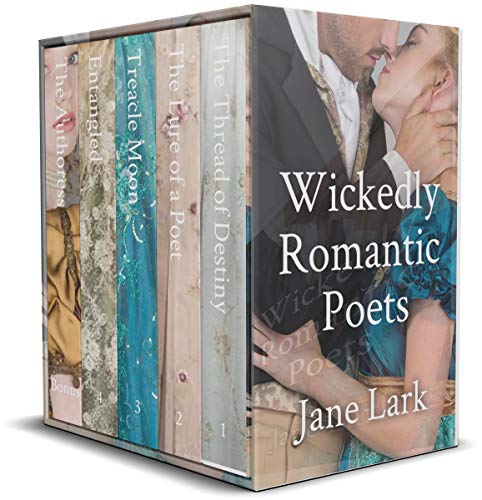 Join four wicked poets on their journey into love.

Book 1: The Thread of Destiny
George Bridges believes in free love until his best friend seduces his sister, unbalancing the foundations of George’s life. Everything he had invested belief and emotion is lost. He is thrown from his position as a ringleader into a world of loneliness. Then he meets a woman who proves herself his equal and she becomes his obsession. So when her brother tells him she will never marry, what then…

Book 2: The Lure of a Poet
Gabriel watches his friends’ contentment with their wives and is tempted to find a wife of his own. There is one woman he has an interest in but she is an opera singer who can choose any man. If his interest is fixed on her he must compete for her affection, and persuade her. But perhaps the Greek goddesses of fate have other ideas…

Book 3: Treacle Moon
A chance meeting in a piazza in Rome, entwines Spencer’s destiny with the life of his father’s ward for the second time. Beyond any other desire, he wants to know if she is happy. As a young man, he had been forced to abandon her and he has always wanted to know what came next for her. Has life been kind to her?

Book 4: Entangled
A well-known face draws Clio’s attention and makes her heart leap. But the chance encounter may unravel the colourful lies she has been embroidering for years.Deceit has a bitter taste. So, what now? What will come next? James cannot leave things as they are. Yet, how will he trust this woman again?

Bonus Book: Jane the Authoress – A Pride and Prejudice variation
‘This book made me want to read Pride and Prejudice again.’ After her father’s death Jane is living among vagabonds and prostitutes in a gothic horror. But when her distant cousin dies the unimaginable becomes real; Jane steps through the door of Stoneleigh Abbey and into her ancestors life of riches, and Mr Darcy is born.

“What a brilliant read!! Jane Lark has an incredible talent to draw the reader in from the first page, Illicit Love captured me immediately. This book has a Romeo and Juliet (which I love) type of feel It’s a display of raw emotion drama and intimacy.” Cosmo Chicklitan

“Beautifully descriptive, emotional and can I say, just plain delicious reading? I defy anyone to NOT love Edward… 5 Glittering Stars” My devastating Reads

“I am NOT a big fan of historical romances but Illicit Love is so beautifully written it was a rare jewel… that just warmed my heart and reeled me in.” – Gimme The Scoop