A thought-provoking, emotionally rattling and gut-wrenching book that will make readers question everything they thought they knew about U.S. health care system… Nutshell by John Albedo 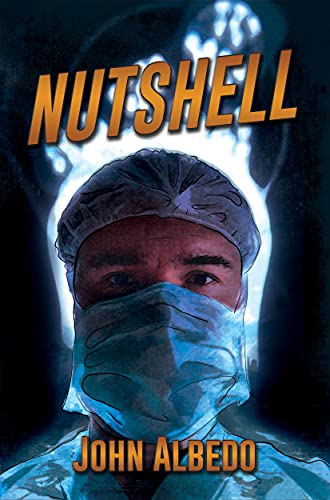 “Nutshell is a genre-bending thriller that offers readers a birds eye view into the rigors of med-school through the lens of a supernatural-tinged, multi-generational drama.” –Vine Voice

During Dust Bowl days in west Texas, a country doctor with shaky credentials delivers a baby, a so-called “monster,” acceptable parlance of that era indicating a newborn with multiple birth defects.

Later, Ivy Pettibone is mistakenly thought schizophrenic due to her garbled speech, landing her in a mental institution. There, she weaponizes one of her unusual birth defects, allowing her to emerge as an alpha female among the inmates.

In a parallel story merging decades later, Chase Callaway, grandson of Ivy’s delivering “doctor,” enters medical school planning on a career in psychiatry. While working as an aide in the mental institution, he strikes up a friendship with Ivy whereupon their lives become intertwined. After observing a surgical procedure with its instantaneous success, Chase alters his path toward specializing in general surgery. There, he ignores warning signs that he might be headed in the wrong direction. As Chase builds his shell of emotional protection to combat the “sins of commission” that are encountered in surgery, his armor includes one rusty bolt – his relationship with a distant physician-father who never finished his surgical residency.

Relationships shift and coincidences abound, raising the question of metaphysical explanations. Is the Callaway family haunted by a 13-generation curse? Is Ivy a designated guardian angel for Chase? Or, is the saga a simple tale made complex by quirky events?