An FBI agent with something to prove. A high-profile murder with multiple suspects. Can she uncover the one lie that will expose the truth before a killer walks free? 99 Truths by Lori Lacefield 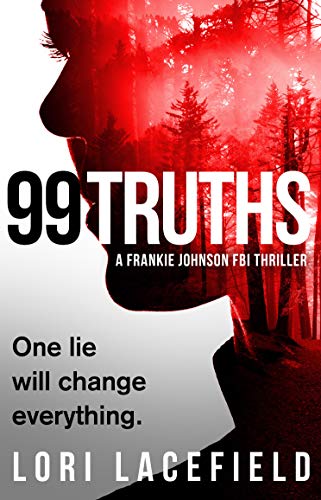 After a recent mistake, FBI special agent Frankie Johnson is desperate to prove she has what it takes to become a lead profiler with the Bureau’s Charlotte, NC field office. So when the district attorney’s daughter is discovered bound, raped, and murdered, she volunteers to assist the local detective on the case to help find her killer. The evidence leads to two suspects—the victim’s husband and her lover—but after a series of intense interrogations, the detective finds himself no closer to uncovering the truth. It’s clear both suspects are lying, but about who, what, and when?

Frankie develops four possible profiles based upon the murderer’s motive and intent, but with the facts shifting daily, any one of them could prove correct. She battles the headstrong detective to convince him of her findings, yet senses their only real hope in finding the true killer is to unwrap the lies layer by layer.

Now, it’s a race to expose someone who knows the deception game as well as she does. Can she see through the misleading words and actions of a murderer to uncover the one lie that will expose the truth before he walks free?

99 Truths is the electrifying first book in the Frankie Johnson FBI Profiler thriller series. If you like cop dramas, heroines with heart, and surprising twists, then you’ll love Lori Lacefield’s chilling mystery.