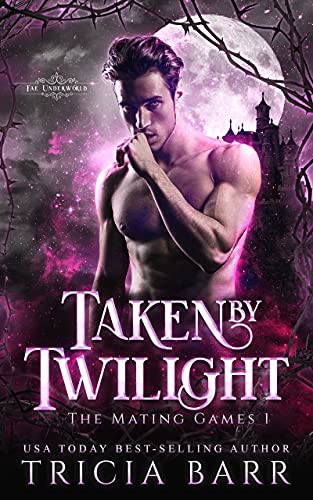 Kindle Price: 99 cents
Text-to-Speech: Enabled
Enjoy Tricia Barr Books? Tell us why and WIN a chance for a FREE ebook!
Here’s the set-up:

Evee Aldren wakes strapped on a plane with nine strangers, and her panic heightens when she sees that one of them is the man who’s haunted her fantasies since she met him two weeks before.

Justin Jackson thought he’d never hear from Evee again after she ended their flirtatious texting. So when he’s forced off a plane full of hostages and sees she’s among them, he’s gripped with only one goal: Get her the hell out of there.

As inhuman beauties herd them like cattle, Evee and Justin learn they’re being forced into an ancient game of cat and mouse, where unwed fae regents hunt for their future mates. They ban together to escape, all the while fighting the intense passion burning between them.

Will they win their freedom, or will they lose so much more than each other to the gorgeous and wicked creatures who chase them? Let the Mating Games begin.

If you like the bite of A Shade of Vampire, the thrill of The Hunger Games, and the steamy passion of Fifty Shades of Gray, you’ll devour Tricia Barr’s dark and passionate series. One-click Taken by Twilight to begin the hauntingly beautiful adventure today!