A free book–Plus your bonus giveaway word! Bagpipes and Ferries: Western Scotland and The Isles by Nancy Churchill

Bagpipes and Ferries: Western Scotland and the Isles 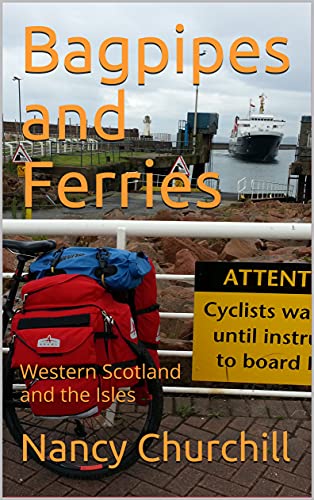 Defying old age and retirement, our cyclist embarks on a solo cycle trip to the remotest parts of Scotland. This wild ride invites the reader to join in, couch cycling through the oft times hilarious interactions with Western Scotland and the Scots.

Aside from the misadventures are discoveries about the richness of Scotland and its history. The oldest mountains on earth provided the foundation of modern geology. Neolithic peoples populated the landscape in a civilised, spiritual way millennia ago, gifting us with tangible places and fascinating things. An exploration of Scotland’s tempestuous and troubling social history unexpectedly explains the warm, welcoming, and sometimes inebriated modern Scot. This history also explains why Scottish cuisine is an oxymoron and the central role of haggis.

From the seat of a bicycle (while missing the rain, the wind, and the cold), ride along and discover what is fun, quirky, and captivating about Western Scotland and the Isles.

Go to Giveaway Central to enter and to say thank you here is a bonus entry word: bagpipes