A story of war, romance, the rivalry between brother and sister, and a young woman’s fight to find her place in the world. Marilia, The Warlord by Morgan Cole 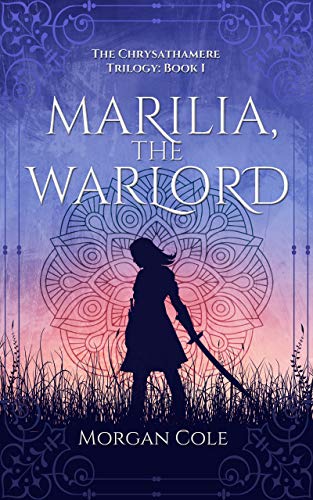 “Morgan has written a masterpiece, one that is movie-worthy.”

“Marilia: strong-willed, erudite and fallible. Cole has delivered a heroine so humbly human I found pleasure in reading fantasy again.” Kristiana Reed, author of Between the Trees, Poetry and Prose, Reedsy.com.

“Marilia is a more sophisticated, more believable version of Mulan. The prose is polished and the world is rich with lush details.” Karen Azinger, author of the Steel & Silk saga.

“Marilia, the Warlord by Morgan Cole is a fantastic start to a rich, new fantasy world.” No Genre Left Behind

“The characters created by Morgan Cole are a wonderful thing to behold. They manage to capture the exquisite balance between exceptional skills and utterly universal human flaws.” Manybooks.com

Marilia, the Warlord is the first part in The Chrysathamere Trilogy, a Game-of-Thrones-style saga of love, war, revenge, and the twists of fate that turned two siblings—once so close they would have died for each other—into the bitterest of enemies, each determined to send the other to the grave.

Born the bastard daughter of a painted lady, Marilia was told she would live out her days within the walls of her mother’s brothel, a companion for the rich men of Tyrace. But after a terrible betrayal, ten-year-old Marilia’s world turns upside down. With the help of her twin brother, Annuweth, she flees the only home she’s ever known in search of the one man who can offer her a chance at a better life: one of her deceased father’s friends, the Emperor of Navessea’s greatest general. What follows is a journey spanning years, from the streets of the desert city of Tyracium to the wild island of Svartennos. Along the way, Marilia discovers, for the first time, the gift she has for strategy and warfare—a world that is forbidden to girls like her.

When Navessea is threatened by a foreign invasion, the defense is left in the hands of a cruel and arrogant general no match for the empire’s foes. With the fate of her new home and the woman she loves hanging in the balance, Marilia—now a young woman—swears to use all her courage and cunning to help repel the enemy.

The struggle that follows will test her to her core and lead her back to the past she thought she had escaped. Facing treachery within her own ranks as well as a devious enemy commander, Marilia will need all the help she can get, even if it means doing something her brother may never forgive—making a pact with the man who murdered their father.