Can’t stand Trump? Love making fun of him? Well, this is the book for you. Oh Daddy Chronicles by Barry Robbins 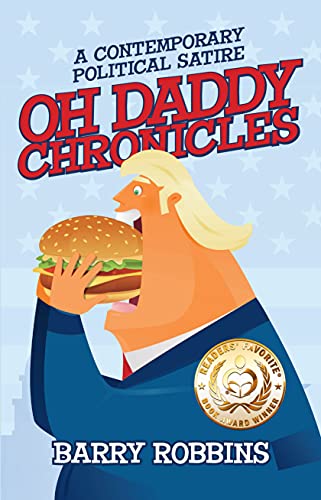 Can’t stand Trump? Love making fun of him? Well, this is the book for you.

Democrats, liberals, progressives, independents, even many Republicans – combine your feelings about Trump with the “Oh Daddy Chronicles” unique brand of humor for a side-splitting ride through the Trump White House. If you’re a fan of satire, especially when it’s aimed directly at “The Donald”, then you’re in luck.

“Oh Daddy Chronicles” is a hilarious political humor book, made up of 46 skit-like episodes that follow the craziness of Trump’s presidency.

Often described as “Saturday Night Live, in written form, on steroids”, these humorous skits are largely based on real events and feature fictional dialogue and conversations between Trump, his family, and government officials.

Between peals of laughter, you will likely agree that the dialogue and conversations are probably pretty close to the truth of what the orange man would actually say/do.

You’ll laugh out loud at the far-fetched but plausible stories contained in this quick but hysterical read. You just might never look at politics the same way again.

So, what are you waiting for? Let’s lampoon Trump together and “Make America Funny Again”. Click “Buy Now” to join in the fun today.

“What a creative and fun way of looking into the madness that was the Trump Administration.”

“Similar to a Saturday Night Live episode, it makes fun of everyone, especially President Trump. It gives answers to questions, like why the president wanted to use hydroxychloroquine and what happened with the Bible incident.”

“It’s a collection of SNL cold openings on steroids that read ‘exactly’ as if they were taken from real life transcripts.”