Steven is forced to make a deal with the Devil. One that might trigger the Apocalypse… Devil’s Deal: A Gripping Supernatural Thriller by Jeff Altabef 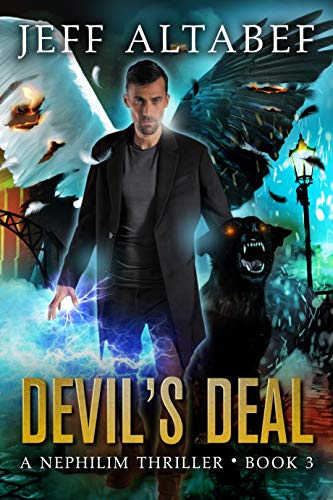 It turns out that hell and Lucifer aren’t what Steven Cabbott imagined. That’s a good thing, although he’s still forced to make a deal with the Devil, one that might trigger the Apocalypse.

Though not at his best, Steven Cabbott is compelled to walk a tricky line. He’s already sworn an oath to Father Paul and the light angels, but if that oath was based on falsehoods, does it still bind him?

A terror they call ‘The Vampire’ is killing kids in Charleston, and Steven can sense that he’s not human, but he’s not an angel or a demon either. He’s something else. Steven, along with is friend Hank, will put everything on the line to figure out what’s happening there and shut down whoever is terrorizing Hank’s hometown.

Steven suspects this is all tied to the End of Days and his untenable position between light and darkness. Hopefully, the Fates will be kind to him.

EVOLVED PUBLISHING PRESENTS an intriguing, thrilling look inside the great battle between good and evil, possibly leading to the End of Days, with the third book in the multiple award-winning “A Nephilim Thriller” series of supernatural thrillers. [DRM-Free]