Unfairly branded as traitors, Aaliss and her brother flee Eden and seek refuge in the one place she’d never expect—the land of the Soulless… Red Death: An Epic Fantasy Adventure by Jeff Altabef 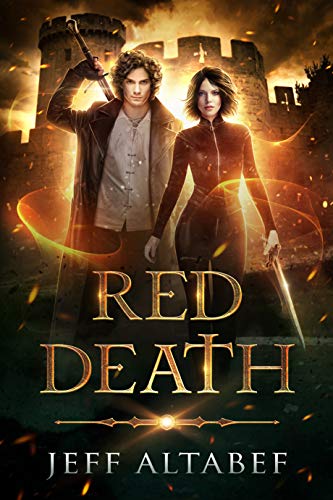 Unfairly branded as traitors, Aaliss and her rather odd, younger brother, Wilky, flee Eden and seek refuge in the one place she’d never expect—the land of the Soulless, a medieval world, filled with magic, witches, and where the Red Death plague affects all.

As a Guardian, Aaliss was trained to keep the Soulless away from Eden. Now she’s forced to turn to them for help. Hunted by those in Eden, she strikes a deal with a surprisingly charming prince—the cure for safe passage—but can she trust him?

Only Wilky knows how to make the cure and the king’s time is short, but can they survive the many challenges needed to gather the ingredients?

Aaliss yearns to return home to clear her name, but when her heart tugs her deeper into the world of the Soulless, she questions everything she once believed. Has her soul been taken? Will she and Wilky fall victim to the Red Death, or might they die sooner in the center of a battle that threatens to tear apart the Soulless world?

Or… might Aaliss finally find, against all odds, what her heart has yearned for all along?